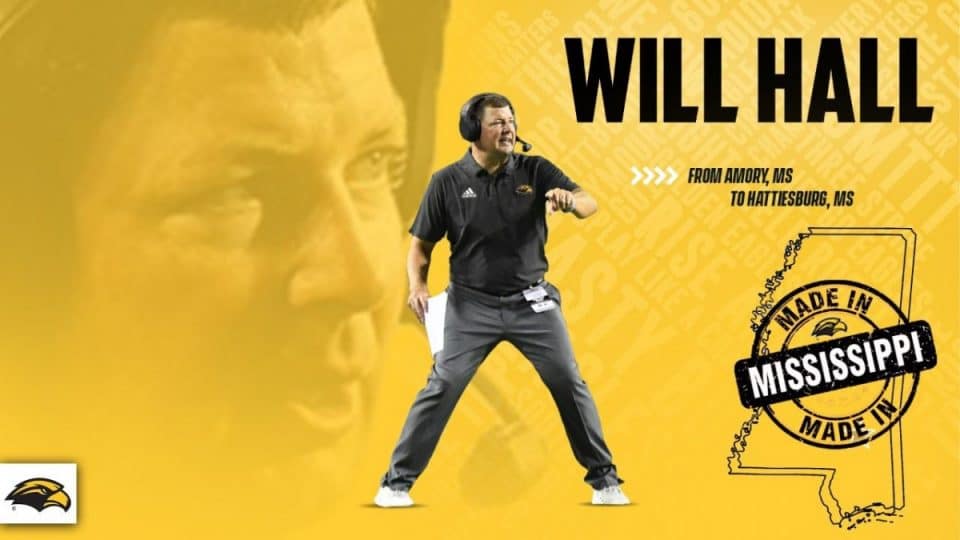 Originally reported by WVVV 25’s Jeff Haeger, USM has now confirmed that Tulane offensive coordinator Will Hall is set to become the next head coach in Hattiesburg following the resignation of Jay Hopson back in September. Scotty Walden, now at Austin Peay, and Tim Billings have filled in on an interim basis ever since, guiding USM through a rough 2020 season.

Hall, an Amory native, will bring his run-heavy style of offense to Southern Miss after guiding the Green Wave offense over the past two seasons. In 2019, the program set a new rushing record with 3,162 on the ground while also totaling 33 rushing touchdowns.

USM saw first-hand just how explosive a Hall-led offense can be as Tulane put up 66 points and 569 yards of total offense (427 on the ground) in this year’s ‘Battle for the Bell.’ Tulane also scored 30 points in a win over USM back in January’s Armed Forces Bowl.

USM’s current roster will give Hall some talent to work with in the backfield as freshman Frank Gore Jr. currently leads the team with 618 yards and junior Don Ragsdale is primmed for a  big 2021 as a senior.

Hall’s previous stops include a year on the staff at Memphis and a year as the OC for the Louisiana Ragin’ Cajuns (2017). That season, the Ragin’ Cajuns led the conference in red zone efficiency and ranked third in rushing yards with over 2,200 yards and 27 rushing touchdowns.

This won’t be Hall’s first heading coaching gig either. In his three years leading the way at West Georgia (2014-16), the Wolves won their first Gulf South Conference (GSC) title since 2000, and Hall was twice named the GSC Coach of the Year.

Hall is the son of a Mississippi high school football coaching legend in Bobby Hall, whom he played for at Amory High School, leading the Panthers to a state title in 1998. In 2000 while playing quarterback at Northwest Mississippi Community College, Hall set an NJCAA record for total offense in a season (4,075 yards) and added an NJCAA single-game record with nine touchdown passes.