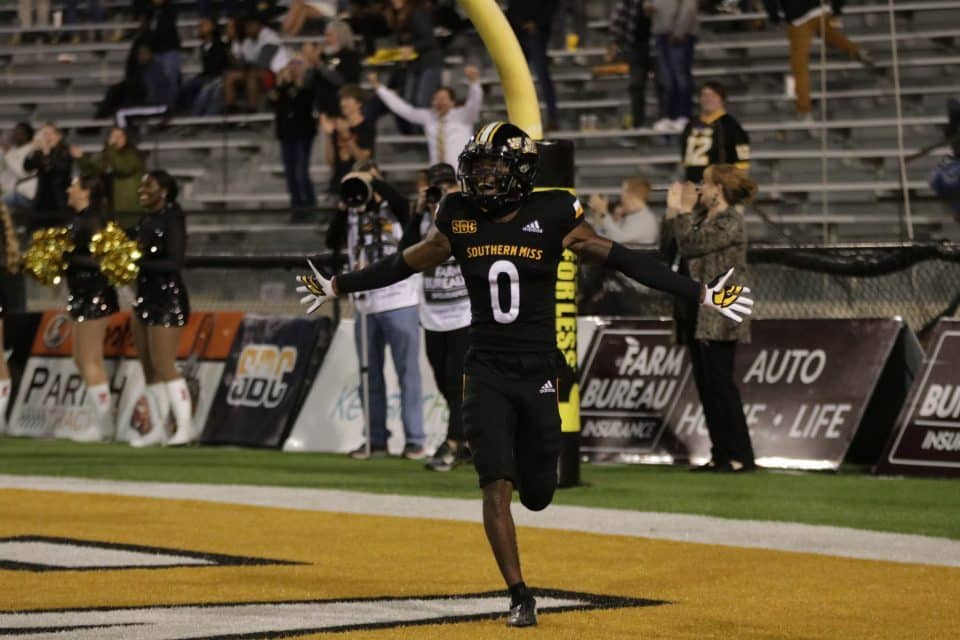 Thursday night’s contest between Southern Miss and Louisiana was a prime example of why the Sun Belt Conference has been dubbed the “Fun Belt.”

In the first 16 plays alone, there was an interception thrown by both teams, a Southern Miss touchdown, and a blocked PAT returned for two points by Louisiana.

And the game really didn’t get any more normal from there.

Frank Gore’s son, who is also a Running Back, throws a DEEP touchdown pass👀

After forcing a three-and-out, the Golden Eagles got the ball back and immediately scored again, this time a 76-yard pass from Zach Wilcke to Jason Brownlee. The Ragin’ Cajuns then found their first offensive points of the game with a 50-yard field goal to close out the opening quarter of play.

With 11:06 left in the second quarter, Louisiana quarterback Ben Woolridge was called for intentional grounding in the end zone, resulting in two points for Southern Miss. On the very next possession, Wilcke connected with Brownlee yet again to take a 29-5 lead.

The Ragin’ Cajuns responded with a touchdown of their own, but a blocked PAT by Southern Miss put the score at 29-11 going into halftime.

The Golden Eagles’ offense fell flat in the second half, allowing the Ragin’ Cajuns to gradually claw their way back into the game. Down 32-24 with 3:12 left to play, Louisiana had a chance to tie and send it to overtime but an interception returned for a touchdown by Natrone Brooks ultimately sealed the deal for Southern Miss.

Next up for the Golden Eagles (5-3, 3-1 Sun Belt) will be a November 5 matchup against Georgia State.

Your Mississippi forecast for Friday, October 28