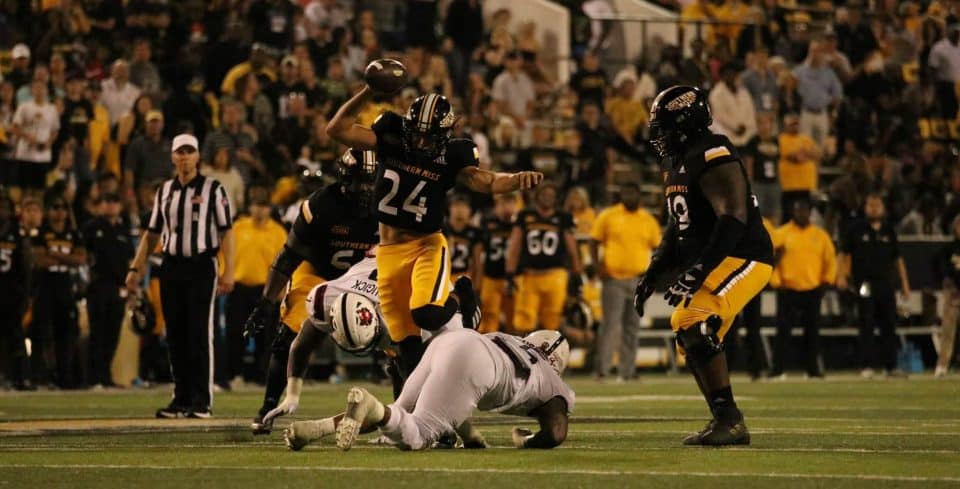 After Southern Miss dropped a tough game on the road against Troy last weekend, Will Hall looked to get right and coached his team to a comeback victory, defeating Arkansas State 20-19 on Homecoming.

While the Golden Eagles struggled offensively due to a shaky performance from freshman quarterback Zach Wilcke, who threw two interceptions, a touchdown pass to Jason Brownlee late in the second quarter would give USM some life right before halftime.

The offensive woes continued in the second half, causing Hall to turn to walk-on sophomore quarterback Jake Lange late in the third quarter with the Golden Eagles down 17-7. Lange’s job was made easier by running backs Frank Gore, Jr. and Janari Dean who added a touchdown each.

Defensively, Southern Miss struggled to slow down Florida State transfer quarterback James Blackmon early in the game. However, the defense bent at times, but they did not break when the game was on the line. In the second half, the Golden Eagles buckled down, holding Arkansas State to just seven offensive points, and forced a crucial turnover on downs late in the fourth quarter to secure USM’s first-ever Sun Belt Conference victory.

Notable performances in Saturday’s game came from Gore, who had 96 yard on the ground and one touchdown, as well as freshman wide receiver Tiaquelin Mims, who hauled in five catches for 81 yards. As for the question surrounding the quarterback situation in Hattiesburg, Hall told reporters that Lange gave them the best chance to win the game, but Wilcke is not done yet.

Next for Southern Miss is a road matchup versus Texas State on Saturday, October 22 at 4 p.m. CT.