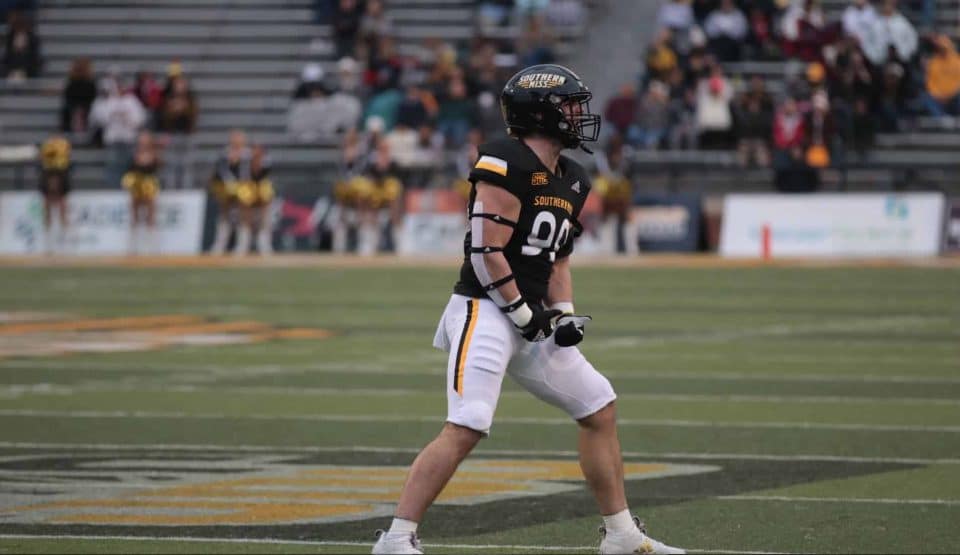 Southern Miss has dropped its third straight matchup, narrowing the pathway for the Golden Eagles to become bowl eligible for the first time since 2019.

USM found early offensive success in the first quarter with a four-minute drive, which resulted in a seven-yard Frank Gore Jr. rushing touchdown. A Briggs Bourgeois field goal put Southern Miss up 10-3 before the offense ultimately fell fat, allowing the Jaguars to take a 13-10 lead into halftime.

The offensive struggles continued early in the third quarter with Trey Lowe throwing an interception on the very first drive. However, the Golden Eagles defense assisted their counterparts by forcing a turnover on downs with South Alabama nearing the red zone.

After a series of punts from both squads, Southern Miss took initiative and marched down the field. In true “Fun Belt” fashion, Gore found standout wide receiver Jason Brownlee wide open in the end zone for a touchdown to reclaim the lead.

South Alabama responded with a touchdown of its own to take a 20-17 lead with just over 11 minutes left in the game. The three-point Jaguars lead turned into a 10-point one after Southern Miss weathered an imperfect storm of an offensive turnover on downs followed by the defense giving up a touchdown with less than two minutes to go.

Nevertheless, the Golden Eagles were not quite ready to mail it in. Lowe marched the team down into scoring position, setting up “Mr. Consistent” for another made field goal to cut the deficit to seven with 13 seconds remaining in the contest.

An unsuccessful onside kick attempt would seal the victory for South Alabama.

Overall, USM was held below 300 total yards in the game. Despite the Jaguars’ impressive defensive performance, a couple of Golden Eagles had noteworthy performances. Gore had 95 total yards and two touchdowns — one in the air and one on the ground. Brownlee led the Golden Eagles in receiving, accounting for 109 of the team’s 196 receiving yards.

Southern Miss will have one more chance to become bowl eligible against Louisiana Monroe on Saturday, November 26.