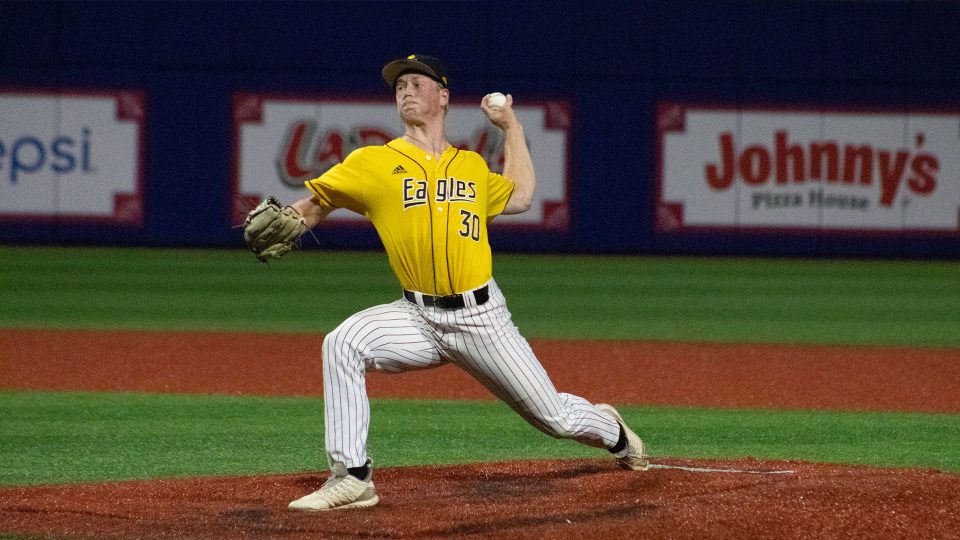 No. 3 seed Southern Miss rode the arms of three pitchers in pulling out a 4-1 victory over No. 2 seed Louisiana Tech in the fourth and final game of the second day of the 2021 Air Force Reserve Conference USA Baseball Championship at J.C. Love Field at Pat Patterson Park.

The Golden Eagles (37-17) advance to Saturday’s winner’s bracket game at 12:30 p.m. CT against the winner of the WKU-Louisiana Tech elimination game Friday at 6:30 p.m. CT.

First on the mound for the Golden Eagles was Conference USA Pitcher of the Year Walker Powell who went 4.1 innings. The right-hander worked around four hits and four walks to allow just one run.

Ryan Och (7-0) then pitched four innings of relief, striking out seven in the process to get the victory. Two big strikeouts came immediately after he entered the game as the Bulldogs had the bases loaded and one out in the fifth.

Hurston Waldrep took the mound to get the final two outs for his second save of the season. With LA Tech threatening for a rally in the ninth after back-to-back singles, he needed just eight pitches to get a strikeout and a groundout to second to seal the victory.

While the Southern Miss pitchers were keeping the home Bulldogs off the scoreboard, they were slowly tacking on runs. They first struck in the third with Reed Trimble delivering an RBI single.

The Golden Eagles registered another RBI single in the fourth from Will McGillis. Two more RBI singles came in the seventh and eighth inning from Charlie Fischer and McGillis, respectively.

The only run LA Tech could muster was in the fifth when Hunter Wells drove in Alex Ray on a single through the right side.

Both McGillis and Lynch led the Golden Eagle attack with three hits each.

Jonathan Fincher (7-2) took the loss for the Bulldogs, throwing 102 pitches through seven innings of work and surrendering 11 hits to the Golden Eagles.