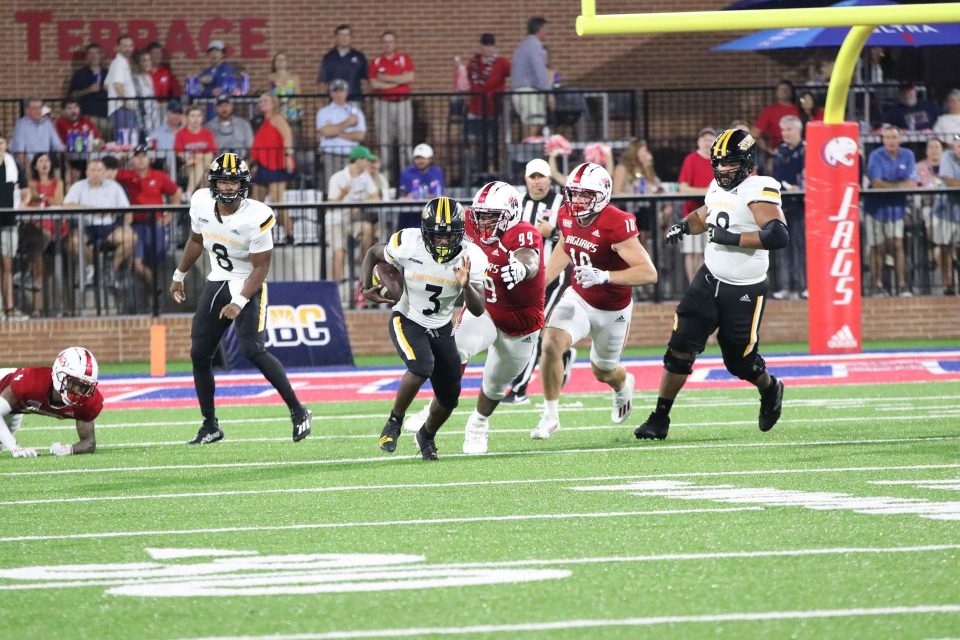 MOBILE, Ala. — South Alabama scored 31 unanswered points and took advantage of three Southern Miss turnovers to defeat the Golden Eagles 31-7 Saturday night at Whitney Hancock Stadium in the season opener for both teams.

The loss ruined the debut of Southern Miss coach Will Hall.

Southern Miss jumped out to an early lead in the opening period as they capped a 16-play, 73-yard drive with a one yard Trey Lowe touchdown run. It looked like the Golden Eagles had their drive end at the Jaguar 30 on a fourth-down play, but targeting on South Alabama kept the drive alive leading to the game’s first score.

The Jaguars responded with a drive of their own as they took a 68-yard drive on five plays, which was setup on a 48-yard pass from Jake Bentley to Jalen Tolbert to inside the five. Bentley then hit Trent Tyre three plays later on a one-yard throw in the front corner of the end zone to even the score.

After Southern Miss fumbled the ball on the ensuing kickoff, USA took advantage of the miscue. The Jaguars got the benefit of a roughing the passer call during the pivotal drive, helping lead to a five-yard pass from Bentley to Kareem Walker to put them up 14-7.

The Jaguars added a 48-yard field goal in the third quarter and picked off a pass and returned it 50 yards in the final two minutes of the contest to put the game out of reach.

The Golden Eagles return to action when they open the home portion of their schedule next Saturday, Sept. 11, when they play host to Grambling State in a 6 p.m. contest.

After a year of no running water in Schlater, MS, it’s flowing now!