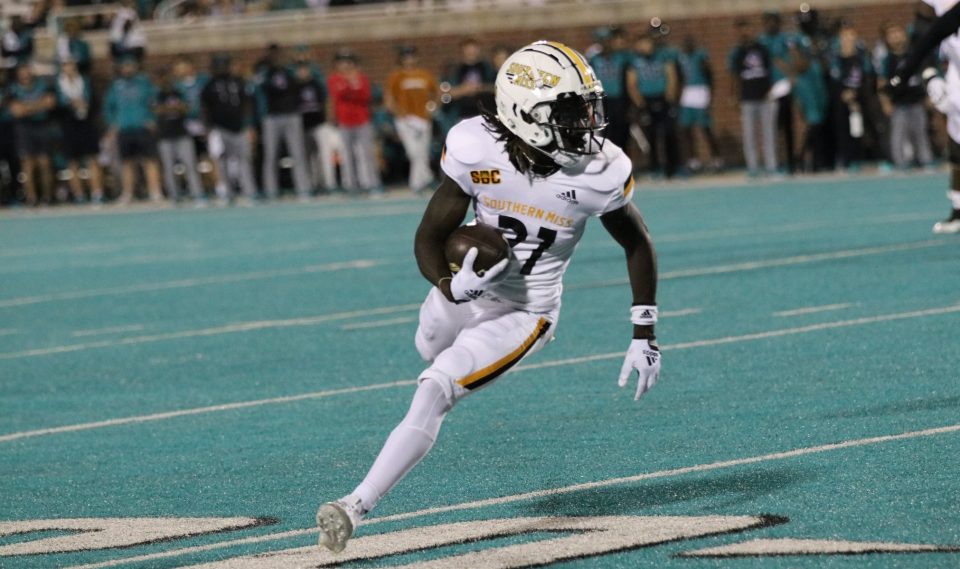 Southern Miss had another opportunity to become bowl eligible on Saturday, but fell short despite a valiant effort to come back from behind against one of the top teams in the Sun Belt Conference.

Although Coastal Carolina was missing its star quarterback, Grayson McCall, due to a foot injury, the Chanticleers didn’t hesitate to attack the Golden Eagles early, scoring 17 unanswered in the first quarter.

USM responded in kind in the second quarter, settling the score. For the first time this season, head coach Will Hall gave junior quarterback Trey Lowe the keys to the offense as the starter. Once Lowe settled in, the West Virginia transfer led the Golden Eagles down the field on three different occasions, setting up a Briggs Bourgeois field goal, a Kenyon Clay rushing touchdown, and a score to Tiaquelin Mims in the air. At halftime, the teams were tied 17-17.

USM carried that momentum into the first drive of the second half to take the first lead of the game, courtesy of another field goal knocked in by Bourgeois, or “Mr.Consistent.” However, the Chanticleers would not go away.

While the Southern Miss defense, which adjusted well after the first quarter, continued to try to take advantage of an inexperienced quarterback on the other side, Coastal Carolina managed to piece together a game-tying drive.

Bourgeois responded, giving USM a 23-20 lead. Unfortunately, the lead did not hold as Coastal punched right back with a touchdown. The Golden Eagles’ secondary blocked the extra point attempt, keeping the game within a field goal’s reach.

With a little under three minutes remaining in the game, defensive back Jay Stanley gave Southern Miss new life with an interception to give his offense an opportunity to win the game, or at the very least tie. Lowe started off the drive at the USM 10 yard line and managed to get near midfield until a turnover on downs would ultimately seal the victory for Coastal Carolina.

In his 2022 debut as USM’s starting quarterback, Lowe completed 19 of 36 passes for 295 yards and a touchdown. Jason Brownlee led the team in receiving with 123 yards on six receptions. Briggs Bourgeois went a perfect three-for-three on the night and made both extra points as he continues to prove to be a valuable asset in the Special Teams.

Next up for Southern Miss (5-5, 3-3 Sun Belt) will head home to take on South Alabama in The Rock on Saturday, November 19.