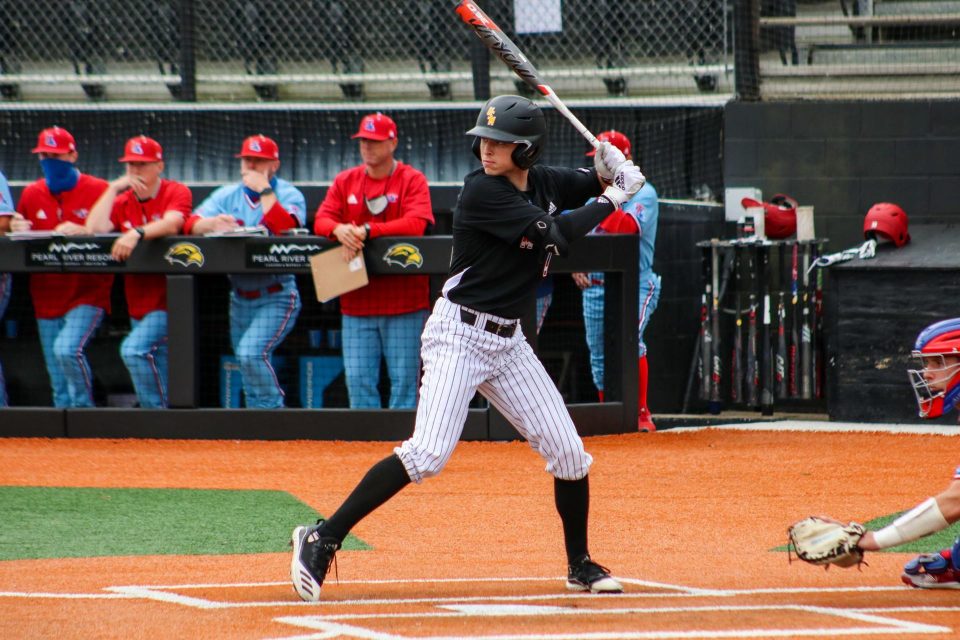 Walker Powell tossed a complete-game five-hitter in the opening game and Reed Trimble homered twice and drove in a career-high seven runs as No. 17 Southern Miss swept a 6-1 and 14-8 doubleheader over Florida Atlantic Saturday afternoon at FAU Stadium.

The Golden Eagles improved to 35-16 overall and 22-8 in Conference USA play. Southern Miss plays its final scheduled regular-season game Sunday against the Owls and need a win or a Louisiana Tech loss to capture the C-USA West Division crown. Game time is set for 11 a.m., as the Golden Eagles go after their sixth league series victory.

In the opening game, Powell retired the first eight batters he faced to extend his streak to 26-straight batters set down, before allowing a two-out double to Jalen DeBose before he came home on a single by Wilfredo Alvarez.

That was the only blemish on Powell’s day as he gave up just the one run with no walks and seven strikeouts to earn the victory and improve to 9-2 on the year. Powell tied Darrell Lindsey (1985-88) for second place on the school’s pitching victory chart with 29. The senior from Fayetteville, Ark., also current ranks No. 1 in Division I baseball for career wins for an active pitcher.

Before Powell gave up that run, the Golden Eagles jumped out ahead with three runs in the top half of the frame.

Andrew Stanley led off the inning with a single to short centerfield. After a sacrifice bunt, Gabe Montenegro – who has enjoyed a solid weekend with seven hits over the first three games of the series – homered to right-center with a two-run shot for his fourth of the year. Reed Trimble then followed with the first of three home runs on the day, a blast to center to give Southern Miss the advantage.

Will McGillis led off the fourth with a home run to left – his first of two on the day – and the Golden Eagles added two more runs in the seventh on a Charlie Fischer single up the middle and a Reece Ewing groundout.

FAU starter Matt Sparling got touched for four runs on eight hits and a walk with two strikeouts over 3 1/3 innings to suffer the loss and fall to 2-5.

In the nightcap, the Golden Eagles had to rally from a 4-0 first-inning deficit as starter Ben Ethridge gave up a pair of two-run homers to B.J. Murray, his 13th, and Steven Loden, his fifth, to give the Owls (28-23, 17-14) the early advantage.

The Golden Eagles responded right away with three runs in the second inning.

After a pop out, Danny Lynch singled and was followed by a McGillis opposite field homer, which gave him seven for the year. The Golden Eagles would load the bases again on a hit by pitch, walk and single from Montenegro to load the bases. Trimble drove in his first run of the second contest by being hit by a pitch. Fischer then hit a liner to right that was caught, and Montenegro was doubled off second to end the threat.

It was not until the fourth when Southern Miss took the lead for good. Dustin Dickerson started the five-run rally by reaching first on an Owl fielding error. Montenegro then single and Trimble blasted a deep home run to score three and give the Golden Eagles its first lead. After a walk to Fischer, Sargent then homered to left – his 10th of the year – and the visitors led 8-4.

Southern Miss put the game out of reach in the sixth as Trimble highlight the frame with a home run to right-center, his 13 of the year, and his second two-home run game of the season. Trimble, and Blake Johnson, each also added two-run singles in the frame and the Golden Eagles added another run on a FAU error.

FAU reliever Adrien Reese, the second of six Owl pitchers, threw two relief innings and allowed four runs (three earned) on two hits and two walks with a strikeout to suffer the loss and fall to 2-1.