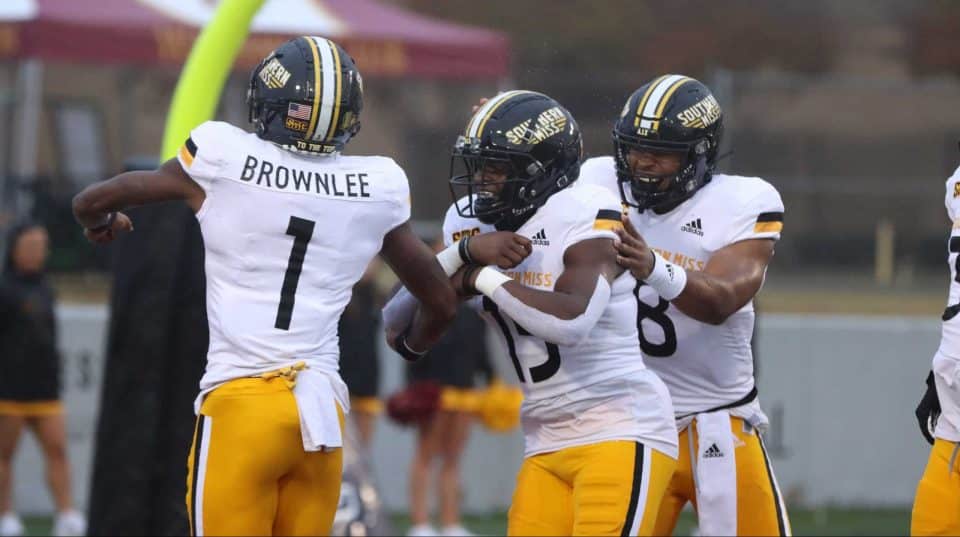 For the first time in three years, Southern Miss will be part of postseason action when the Golden Eagles take on Rice this Saturday in the 2022 LendingTree Bowl.

“We’re really excited to be here. It’s been a tough road for us,” USM head coach Will Hall said upon arriving in Mobile, Ala. on Tuesday. “After taking over this program two years ago, we’re slowly but surely building it back and we’re excited to get Southern Miss back in the postseason again. We played a really tough schedule and battled out six wins. We played 12 games and 11 of them were really, really close. Could have won a few more, could have lost a few more.”

As of date, the series between Southern Miss and Rice is split at 6-6. The Golden Eagles will look to surpass a breakeven record not only in its series against the Owls but also on the season as a whole.

For the Golden Eagles to reign victorious in the LendingTree Bowl, the team will need to get the ball in the hands of its two biggest playmakers, running back Frank Gore, Jr. (1,053 yards, 7 touchdowns) and wide receiver Jason Brownlee (819 yards, 7 touchdowns).

Defensively, Southern Miss will turn to leaders in linebacker Santrell Latham (81 tackles, 3.5 sacks) and defensive back Malik Shorts (92 tackles, 3 interceptions) to carry the torch for a unit that’s proven physical all season. The defensive line will be tasked with pressuring an opposing signal caller who has the ability to make big plays when given time in the pocket.

Rice, on the other hand, is one of two teams in the postseason with a losing record. The Owls ended the regular season with a three-game slide after getting off to a 5-4 start. If Rice wants to pull off the upset, the team will have to capitalize when in the red zone. On the year, Rice has averaged more yards per game than its opponents but has averaged 13 fewer points.

The Owls will rely on freshman quarterback AJ Padgett (229 yards, 2 touchdowns) to play a consistent game and not turn the ball over. The young signal caller is taking over for veteran TJ McMahon who led the Owls all season. Rice will rely on Padgett to shine under the bright lights against a defense that will attack.

Where: Hancock Whitney Stadium, Mobile, Ala.

Your Mississippi forecast for Friday, December 16