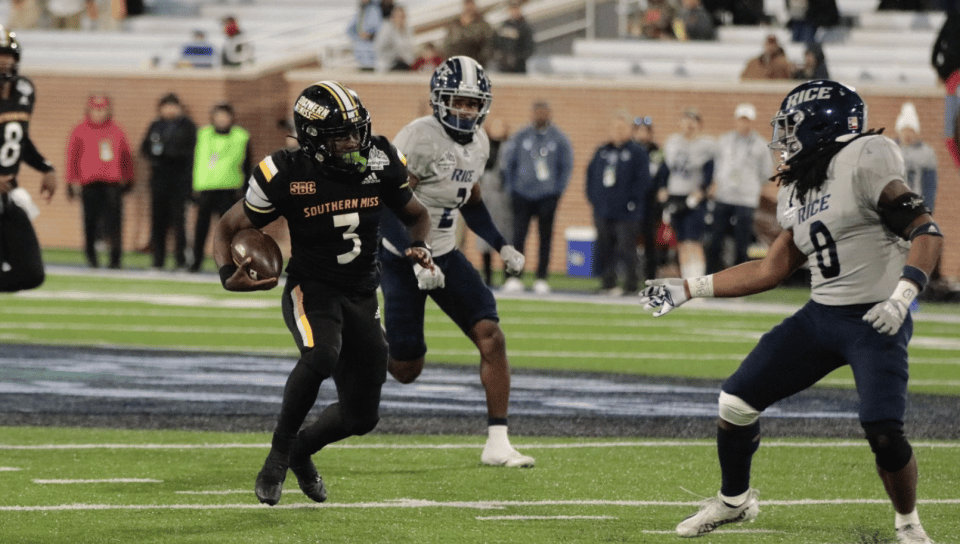 Have a day, Frank Gore, Jr.

“I’m just grateful for these guys. They opened up lanes, and we got it done,” Gore, surrounded by his teammates, told ESPN after the game. “I knew how important this was for our team.”

Southern Miss let go of a 17-3 halftime lead, allowing the Owls to score three consecutive touchdowns in the third quarter. That’s when Gore took it upon himself to make sure his team left Hancock Whitney Stadium with a win on Saturday night.

With 3:52 left to play in the third, Gore hit Tiaquelin Mims on a 18-yard touchdown pass, becoming just the second player in FBS history to have over 250 rushing yards and a passing touchdown in the same game.

Frank Gore Jr can do it all🔥

Senior quarterback Trey Lowe III then found Jason Brownlee on a 26-yard touchdown pass on the following possession to give the Golden Eagles a 31-24 lead. With another touchdown from Gore – this time a 55-yard rushing score – and a Jay Stanley interception, Southern Miss sealed the win over its former conference foe.

Your Mississippi forecast for Monday, December 19