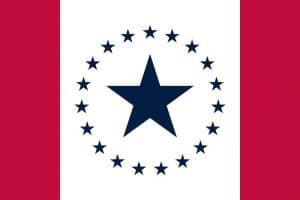 Laurin Stennis, who created the “Stennis Flag,” went to social media on Sunday night to announce that she is stepping away from the campaign for her flag to become the new Mississippi state flag.

The post stated that she will be stepping away from the Stennis Flag campaign due to the “potential harm” her last name could cause.

Stennis’ grandfather, John C. Stennis, was a United States Senator for 41 years and a segregationist for the bulk of his career. In a previous interview with News Mississippi, Stennis made it clear that the flag had nothing to do with her grandfather, yet she understood the negative effect the namesake could have.

“I think some folks when they see Stennis, they think it’s named for John C. Stennis,” she explained. “I would have a reservation about that too. Luckily, it is not named after him.”

The flag, which features a large blue star encircled by 19 smaller stars on a white field, flanked by red bands, has now been renamed the “Hospitality Flag,” according to the flag’s website.

The Mississippi Legislature has a chance this week to make a change to the state flag before they leave Jackson, however, Speaker of the House Philip Gunn told us on Friday that the chances of the legislature voting to remove the current state flag are slim to none.