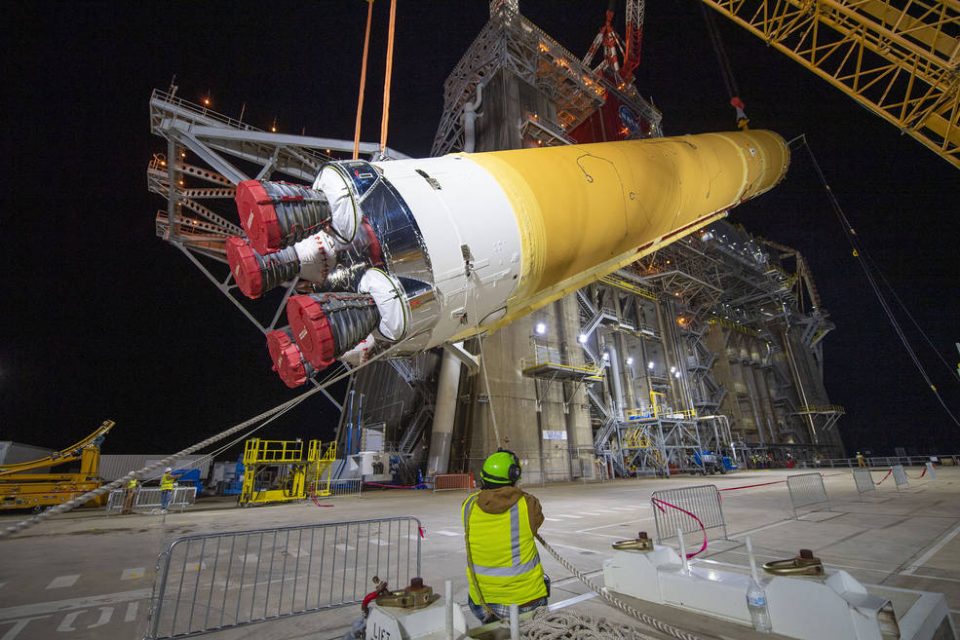 Crews at Stennis Space Center work Jan. 21, 2020, to install the SLS core stage on the B-2 Test Stand for a series of Green Run tests. Operations required crews to lift the stage from a horizontal position into a vertical orientation, a procedure known as “break over.” (Credits: NASA/SSC)

Image above: Crews at Stennis Space Center work Jan. 21, 2020, to install the SLS core stage on the B-2 Test Stand for a series of Green Run tests. Operations required crews to lift the stage from a horizontal position into a vertical orientation, a procedure known as “break over.” (Credits: NASA/SSC)

This summer, Olympic weightlifters broke records pursuing gold medals in Japan. But in early 2020, another historic heavy lift took place on the other side of the world for a prize to advance human space exploration.

A specialized team of professionals at NASA’s Stennis Space Center near Bay St. Louis, Mississippi, defied gravity to lift the core stage of the Space Launch System (SLS) – all 188,000-pounds – to gently position it on the historic B-2 Test Stand, which has tested engines since the Apollo Program.

NASA is building SLS as the world’s most powerful rocket to return humans into deep space, to the Moon, and, eventually, Mars. Through the Artemis program, NASA will send the first woman and person of color to the Moon by 2024.

In January 2020, after the SLS core stage was installed on the B-2 stand, NASA began a series of critical tests called Green Run. The term “Green Run” refers to the testing of new hardware for the first time and in the same way it must operate on a mission. The goals of the tests were to ensure astronaut safety, to increase probability of a successful Moon landing, and to discover and address any stage or systems issues. For the final test of the series, operators fired all four RS-25 engines simultaneously, just as during an actual launch, to generate a combined 1.6 million pounds of thrust.

The testing built on early work of the heavy-lift team. Like any good team before a big event, the lift team practiced to ensure its efforts were successful. The preparation began the summer of 2019 as the team practiced on the core stage pathfinder, a full-scale shape, size, and weight replica of the actual flight unit.

The pathfinder was built to allow NASA teams – including the Stennis heavy-lift crew – to practice handling techniques and procedures needed for the actual core stage. For the Stennis team, this included a detailed rehearsal to practice lift procedures and crane location before the official core stage arrived.

The core stage pathfinder arrived at Stennis in early May 2019. Once it was rolled out on the tarmac, crews practiced small lift procedures and installed equipment needed to perform a full lift and installation. The actual lift-and-installation procedure took place through the night and early morning hours Aug. 23-24, when weather conditions were most optimal.

Once lifted, the pathfinder was carefully positioned into place on the stand, settling on so-called “yellow boxes,” spherical bearings used to anchor the core stage in position on the stand. At one point, a procedural miscalculation resulted in a broken pathfinder aft strut. Once repaired, the lift team implemented more hands-on training in handling procedures to prevent the same mistake from occurring during lift of the core stage.

With the pathfinder replica, the team also discovered a need for cable management. Several cables extended down from the Hydra Set Precision Load Positioner, a device that allows the team to raise and lower the stage in micro increments, and the master link device used to control the test article while it is in the air. To remedy the issue, the team attached an arm to the “spider” – a yellow lifting cap that allows the B-2 Test Stand derrick crane to attach to the forward end of the test article. This addition allowed the team to secure the cables away from the rocket’s body, preventing them from damaging the core stage’s thermal protection system.

“The pathfinder really laid the path for the core stage installation and removal to be more successful,” said Casey Wheeler, the NASA lifting device and equipment manager at Stennis. “It helped us run through processes that you would have not been able to run through completely without actually having a complete mock-up. The practice helped people become more familiar with the procedures and gain confidence with what exactly they were supposed to be doing whenever the multi-billion-dollar test article actually arrived.”

With the pathfinder’s removal on Aug. 29, 2019, the lift team prepared for the actual core stage. On Jan. 12, 2020, the SLS stage, 212 feet tall with a diameter of 27.6 feet, arrived on site and was rolled onto the B-2 Test Stand tarmac. The subsequent two-day lift and installation process Jan. 21-22 required over 150 personnel, as well as specialized lifting devices and equipment.

As practiced with the pathfinder, the lift process began by attaching a cable from the derrick crane on top of the B-2 Test Stand to the spider device on the forward section, or front end, of the core stage. Ground tail crane cables were attached to the aft end, or back end. Once both cranes were attached properly, the stage was lifted off the ground support equipment to hover horizontally above the ground. The derrick crane then lifted the forward section towards the sky as the ground tail crane assisted in guiding the aft end, allowing it to stay steady at its elevation just above the ground as the core stage was “broken over” into a vertical position.

One of the biggest risks during this delicate procedure was wind speed – a factor beyond the team’s control. Both installation and removal processes took up to 24 hours and required optimal wind conditions. As a result, the operations were performed at the night when wind conditions were most favorable.

During the initial lifting process, the core stage is horizontal and closer to the ground, allowing for a maximum of five mph sustained winds and 10 mph wind gusts. Any higher wind speeds risked significant damage to the ground equipment.

Once vertical and lifted skyward, the core stage had to be swung into place and positioned into the narrow test slot on the B-2 Test Stand. During this stage of operations, suspended over 200 feet above ground, the core stage could only handle a maximum of 10 mph sustained winds and 15 mph gusts. This threshold was established to prevent any unwanted movement that could result in damage to the crane, stand, or test article itself. The team had to wait for favorable wind conditions to move forward.

When wind speeds were deemed appropriate, the core stage was slowly placed into the stand, where there was less than a few inches space between the testing article and the supporting test stand framework. The Hydra Set and master link devices helped provide 360-degree movement as the test article was lowered into place with a precision of 0.0001 inches. This guaranteed the test article’s center of gravity, which is not centrally located, was appropriately positioned in the test stand.

While the pathfinder replica helped the team practice lifting and installation processes, it could not predict the effects of Mississippi weather on the actual core stage. Soon after the stage was installed and Green Run tests begun, work was temporarily halted due to the COVID-19 pandemic. Once testing work resumed with safety and health restrictions in place, the test team endured a summer of record-breaking tropical storm activity.

Though securely installed on the stand, the core stage was left vulnerable to the elements for an extended time. This caused several pieces of critical lifting equipment to be exposed to the elements and to unexpected levels of precipitation, humidity, and fog common to the Gulf Coast. Moisture intrusion into the Hydra Set and the master link devices caused complications, forcing the team to troubleshoot to ensure the mission was not jeopardized.

In addition to waterproofing the original Hydra Set, an extra device was transported from Marshall Space Flight Center in Huntsville, Alabama, to Stennis to prevent any lack of coverage. A third device also was present on site and available for spare parts as needed. Both allowed for seamless repairs of any unforeseen complications but ultimately were not needed or used.

Green Run testing of the SLS core stage proceeded throughout 2020 and into early 2021. An initial hot fire test of the four RS-25 engines on Jan. 16, 2021, experienced an early shutdown, which led to a second attempt a couple of months later.

On March 18, operators fired the stage engines for a more than 8 minutes, the same amount of time needed during an actual launch, marking a successful end to Green Run testing.

Following refurbishment work, the spotlight fell once again on the Stennis heavy-lift team as it prepared to remove the core stage from the stand for transport to Kennedy Space Center, Florida and preparation for the Artemis I mission.

Once again, weather proved the key concern. Daily “Go/No Go” meetings, at 6 a.m. and 6 p.m., were essential in deciding the team’s plan of action. In each meeting, participants would receive a full weather report, including wind patterns and predictions, from the National Weather Service and discuss possible paths forward.

The meetings were essential because once the removal process began, there was little room for flexibility that would allow the team to revert to a safe position. Instead, the team would be forced to continue until there was no longer a load on the crane. The longer the load was suspended, the more possibility there was for mechanical failure or inclement weather to arise.

The twice-a-day weather reports allowed the team to identify upcoming windows of opportunity and keep the test article safe.

“You are not going to get perfect conditions one hundred percent of the time; in fact, they usually do not work out in your favor to be honest,” Wheeler said. “If something could work against you, it typically would at the most inconvenient time. You have to go into it with the mind-set of ‘Hey, we might be stuck here waiting for a window for the next couple weeks, but it is what it is. There is nothing that you can do about that.’ All you can do is try to stay as involved, informed, and coordinated as best you can, so that everybody stays on the same page. You do not want to lose any momentum. Your marching army is ready to go whenever the right opportunity presents itself.”

The patience, preparation, and training paid off. More than one year after the core stage was installed and following a number of weather holds, the removal process began on April 19 and continued into the following day.

In this case, the operation was performed in a reverse fashion. While in the vertical position, the core stage was removed from the test stand framework and lowered back over into a horizontal position to settle on the ground support equipment.

Following some prep work, the stage was loaded onto NASA’s Pegasus barge and transported to Kennedy in preparation for launch. This was not only a moment of excitement for the team but of relief as well. The long hours and extensive problem solving resulted in mission success, leaving heavy-lift team members with an overwhelming sense of accomplishment.

“We achieved something that was incredibly difficult,” Wheeler said. “There was a real sense of pride.”