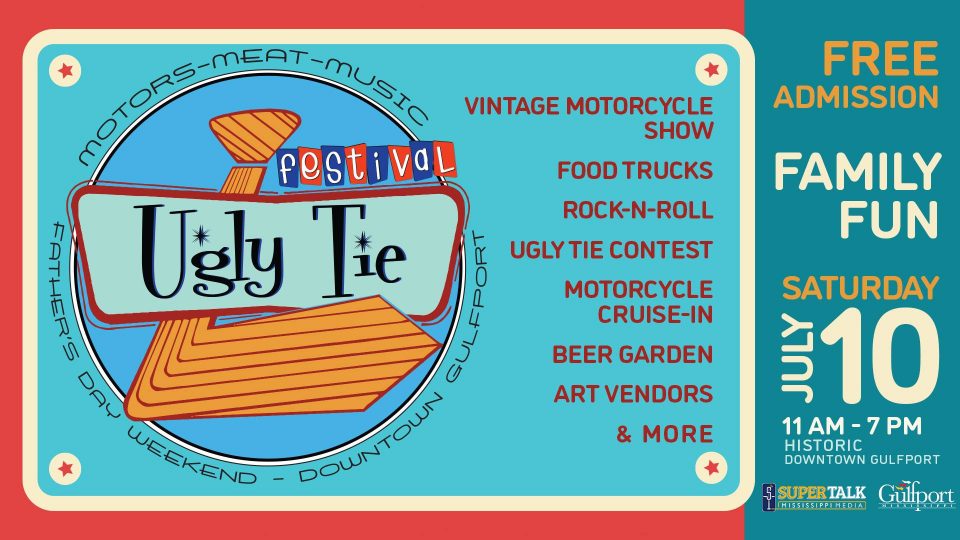 If you’re looking for something to do on the Mississippi Gulf Coast this Saturday, look no further than the ‘Ugly Tie’ Festival presented by SuperTalk Mississippi & the City of Gulfport.

Originally scheduled for Father’s Day, the event was postponed due to the arrival of Tropical Storm Claudette, but the forecast this weekend should hold up for the festival that will bring food trucks, live music, cold beer, art vendors and vintage motorcycles to downtown Gulfport from 11 a.m. to 7 p.m.

Streets will be blocked off around the stage for the event, and the food trucks will line the streets around the downtown area. Also included in the festivities will be an ugly tie contest with several prizes up for grabs.

Several musical acts will take the stage throughout the day including The Chitlins, Storyville The Band, Mike Halat, and Gulfport Mayor Billy Hewes’ band Cut Bait.

Following a motorcycle cruise-in presented by French & Sons, vintage choppers will be parked in ‘Motorcycle Alley.’

Operations Manager for SuperTalk Gulf Coast Kenny Vest explained that the idea for the festival came from Mayor Hewes and that he hopes the partnership is one that will continue for years to come.

“This event could evolve into a major event. There are several ways to grow it,” Vest said. “We want to see how this first year goes, but we plan to do it next year and grow it each year, and you just never know how big it can turn out to be.”

Admission is free, so bring the whole family out for a full day of fun!