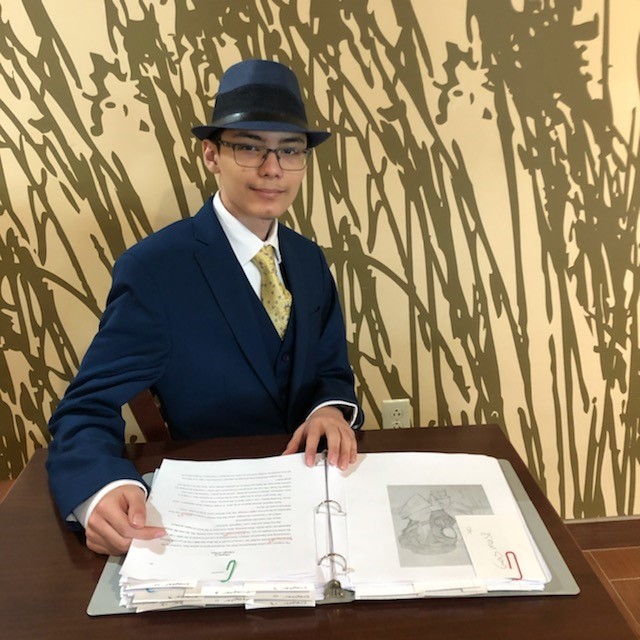 Fourteen-year-old Elias Mask is already realizing a lifelong dream, and through it he’s helping enrich the lives of others. Elias, a ninth-grader at Itawamba Agricultural High School (IAHS) in Fulton, recently published his first book, “The EXTRA Ordinary Life of Elias.” The book is the first in a series of four that Elias began writing at age 10.

Finding a publisher wasn’t easy for a kid with a dream. “A best-selling author noticed Elias on Instagram and recommended he go to a book conference to find a publisher,” said Elias’ father, Terry. “You had to be 18 to attend, so they allowed my wife and I to attend with Elias for free.” It was in the summer of 2019 that the Masks connected with Charlie’s Port, a nonprofit publishing company for child authors. “The director of Charlie’s Port was seated at our table at dinner and asked me, ‘which one of you is the writer, you or your wife’ and I told her ‘neither, it’s our son.’” After sharing the manuscripts, Charlie’s Port contracted with Elias to publish all four books.

“The EXTRA Ordinary Life of Elias” contains 120 illustrations by 19 children from around the world, the youngest of whom is 6. “This makes my book successful before a single copy is sold because already 20 kids get to realize a dream of helping create a published book,” said Elias, who met via Zoom with each illustrator to share his ideas before they submitted their artwork.

IAHS will host a book signing for Elias from 5-7 p.m. Monday, Nov. 1, in the school’s commons area. In addition to selling and autographing his book, Elias will speak briefly and his publisher will offer tips for aspiring authors. The public is invited to attend the free event.

Timing is perfect as Elias is donating proceeds from his book to the NMMC Hospice Fund, which is managed by the Health Care Foundation of North Mississippi. The book signing kicks off National Hospice Month in November. “It all started back when I was 5 years old and my grandfather Elias required hospice,” said Elias, who traveled with his mother to California to be by his side. “Being 5, I didn’t really grasp just how sick he was, but I did know my entire family was very sad and crying a lot.” The hospice team quickly endeared themselves to Elias’ family.

“They comforted my mother and even took me for ice cream occasionally,” he said. “They were with us every step of the way. I want the proceeds from my book to give back to a group of people who are often overlooked – hospice. It will be with an emphasis on kids who are affected when medical tragedies strike their families.”

According to his father, Elias is very tenderhearted, always wanting to help others. “With the world in the midst of pandemic and health care professionals overwhelmed, cancer and other terminal illnesses never let up, causing even more stress to our “heroes in hospice”. I call them heroes because I’ve witnessed their superpowers firsthand,” Elias said. “I’m happy my book allows me to have a larger rock to make a bigger ripple that will hopefully circle our world and help our planet be a better place for everyone.”

This isn’t the first time Elias has helped hospice patients and their families. When he was 7, his mother told him about NMMC Hospice Care Baskets, an annual Christmas project. “Elias had saved about $138 to buy a video game system, but he told us he wanted to donate his money for this project instead,” Terry said. “He wrote a letter to send with his donation, and I think his letter made the Hospice staff cry.”

Because Elias’ main goal in writing is to inspire other kids to read and write and to follow their dreams, his family is securing donations from area businesses to purchase a book for several classes of Itawamba County students.

In addition to the book, the Masks are gathering books and artwork from people Elias has connected with along his journey with plans for a silent auction or other fundraiser for the NMMC Hospice Fund soon.

“I would appreciate everyone’s support,” Elias said, “and in return we will make the world a happier place for everyone.”