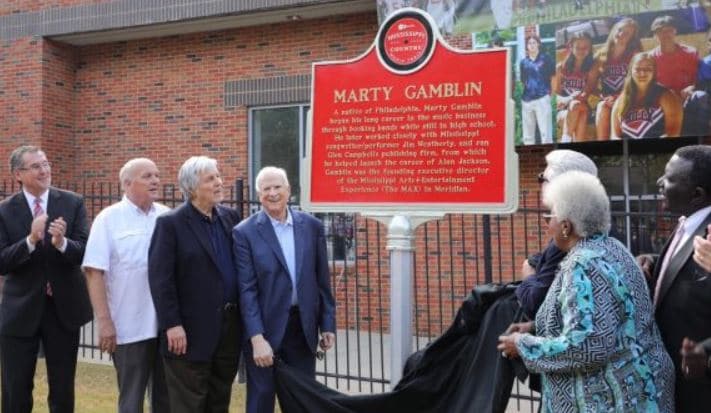 “For decades, Marty Gamblin has been an extension of Mississippi’s rich musical heritage by sharing his talents as a publisher and manager for some of the biggest names in country music,” said Visit Mississippi Director Craig Ray. “He continues to contribute to the state’s cultural legacy by overseeing the Mississippi Arts and Entertainment Experience, sharing the Mississippi story with the world.”

The marker celebrates Gamblin’s nearly 40-year career in the country music industry, of which he spent more than two decades as an executive at Glen Campbell Music publishing firm. The firm produced 16 No. 1 singles and was named a Top 10 publisher by Billboard. He went on to help launch the career of Alan Jackson and represented many Mississippians in the industry, including singer/songwriter Jim Weatherly, singer Dorothy Moore and band Pearl River. Gamblin is currently the Hall of Fame director at the Mississippi Arts and Entertainment Experience.

The Marty Gamblin Mississippi Country Music Trail marker can be found at 248 Byrd Ave. in Philadelphia in front of Philadelphia High School.

Rebel Report: Assessing the Alabama loss and the quarterback situation

Lottery could begin in 2019

What Mississippians want: State of the State poll