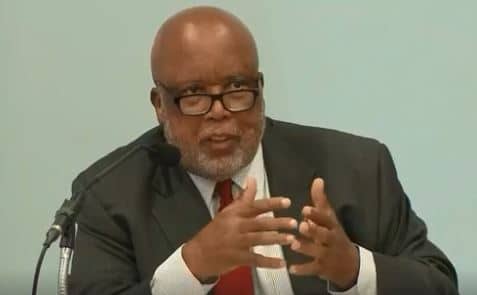 Below is the text of Thompson’s remarks:

In recent years, there has been an increase in violence and threats of violence against nonprofit institutions. Just this year, on April 27, a gunman opened fire on congregants at a Passover celebration in a California synagogue. Other noteworthy attacks against innocent people in houses of worship include the April 21 coordinated terrorist attacks on churches and hotels in Sri Lanka; the March 15 deadly New Zealand mosque shootings; the 2018 Pittsburgh “Tree of Life” synagogue shooting; the 2017 Sutherland Springs, Texas church shooting; the 2015 Charleston, South Carolina church shooting; and the 2012 shooting at a Sikh Temple in Milwaukee, Wisconsin.

It is a sad fact that our houses of worship are living under the threat of violence at the hands of extremist terrorists of all ideologies. While we need to work to eradicate all forms of extremism, these at-risk faith-based centers and non-profits need our protection in the short-term. I have long advocated for an expansion of grant funding to places of worship in rural areas, and in 2018, after years of my advocacy, FEMA announced its first awards of ten million dollars to nonprofits outside of urban areas.

This year, as Chairman of the Homeland Security Committee, I worked with my colleagues across the aisle and introduced, H.R.  2476, the Securing American Non-Profit Organizations Against Terrorism Act of 2019, which authorizes a security grant program within the Department of Homeland Security for 501(c)(3) tax-exempt organizations that are at risk of a terrorist attack.  That legislation increases the grants to rural areas to 25 million dollars. I am proud to say that that legislation had 109 cosponsors and passed the House of Representatives this past June.

Aside from the legislation I introduced, after the depraved terrorist attacks on houses of worship in San Diego, Sri Lanka, and New Zealand, the Ranking Member of the Committee on Homeland Security and I asked the Acting Secretary to establish this Homeland Security Advisory Council Subcommittee to examine these attacks. It is imperative that a group of security advisors and faith-based leaders convene to assess the information sharing apparatus and threats to religious institutions. Further, as this body meets, it is incumbent that it has a frank discussion on the threats to institutions, including threats from white supremacist ideology, which spurred horrific attacks on Mother Emanuel AME Church in Charleston, South Carolina and Al Noor Mosque in New Zealand.

Domestic terrorism cannot be swept under the rug in these conversations. For far too long, the government has not given this threat enough attention, and at one time, seemed to put a keen focus on international terrorist organizations, which also target houses of worship, but after the bloodshed in El Paso and Dayton, we cannot continue to be oblivious to the threat or what stokes the threat. Domestic terrorism—particularly white supremacist extremism and other forms of right-wing extremism—presents a real and persistent threat to the security of our homeland.  In the last decade, domestic terrorism has become an increasing concern in the U.S.

After years of inaction by the then-Republican majority, the Committee on Homeland Security held its first hearing in eight years on domestic terrorism on May 8.

In 2018, domestic terrorists killed at least 50 people in the U.S., a sharp increase from the 37 extremist-related murders documented in 2017. In fact, just last month, FBI Director Wray testified before the Senate Judiciary Committee and indicated the FBI has had more domestic terrorism arrests in the first three quarters of 2019 than all of 2018 combined. A majority of those cases investigated by the FBI involving a racial motive were motivated by white supremacy. In that same testimony, FBI Director Wray also indicated that the volume of domestic terrorism arrests is now equaling those of international terrorism.

Hopefully, today’s conversation will be a good start toward developing some solutions for the Department of Homeland Security and the federal government as a whole.

Finally, I would be remiss if I came before the faith-based community and local law enforcement and did not mention the devastation that was caused in this community last week. Last week’s massive ICE raid will have an enormous, long term effect on the state of Mississippi.

I do not understand why ICE picked this time—right after the country was healing from a targeted attack on Mexicans—to perform these raids in this community. ICE turned the first day of school, a special day that is to be filled with smiles and happiness, into a fearful memory for many children of Mississippi. As usual, many in the faith-based community, are using their resources to assist the children that are in need.

And while Secretary McAleenan has stated the timing was “unfortunate”, there is not much that can be done to erase the pain and loss caused to this community. So, while I am glad today is designed to give some kind of assurance on threats of violence to faith-based organizations, we all have a long way to go when it comes to immigration enforcement, which also impacts the faith-based community and local law enforcement.

Thunder & Lightning: What People Are Missing About Dak Prescott’s Contract