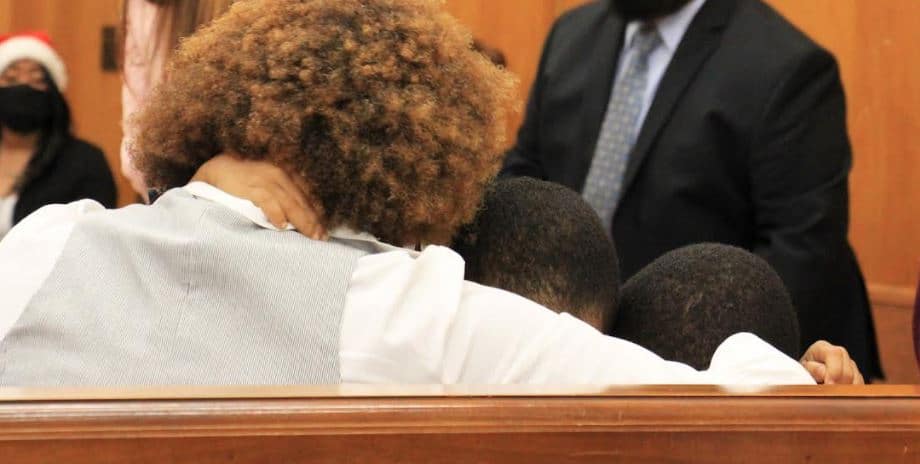 Image Above: Seconds after the adoption was completed in Hinds Chancery Court, a great aunt hugs three nephews who are now legally her sons.

Adoptions were finalized for 14 children on Monday in Hinds Chancery Court during a mass adoption ceremony.

The children ranged from toddlers to pre-teens who came into the custody of the Youth Court system due to allegations of abuse or neglect. Adoptions included sibling groups of two, three and four children as well as individuals.  Time spent in foster care ranged from two to 11 years.

Chancellor Crystal Wise Martin, who presided and finalized the adoptions, said, “Today is the day that the law gets to catch up to what has been growing in your hearts. Today you finally become a legal family.” She said, “Love transcends biology and DNA.”

Attorney Crystal Welch, who directs the Mississippi College School of Law Adoption Clinic, worked with law students to schedule the adoptions for eight of the nine families. “We are so grateful to get these adoptions done before the holidays because what better gift,” she said.       Several of the cases in which adoptions were finalized involved relatives. A great aunt adopted three great nephews ages 4, 10 and 12.

“Family is everything to me,” the woman said in testimony before she went from being a great aunt to being the mother of three. “I love these boys and I want the best for them, and I don’t want them to be with anyone but family.”

Another couple adopted four siblings – three girls and a boy. “We love them, and we’ve been waiting on this day for a while,” the mother said.

Others were foster parents who had expressed a willingness to take care of children who had been abused. Several testified about receiving a call from social services workers to ask if they could take care of a child upon the child’s release from hospital care.

One adoptive mother of a 2-year-old testified, “He was five days old, and I said yes, and we’ve been together ever since…. I feel like the one who was blessed.”

Another adoptive mother recounted getting the call 11 years ago. “I’ve had her since she was 4 days old. She’s everything to us.”

Two sets of adoptive grandparents, including grandparents who drove down from St. Louis, were in the courtroom to celebrate the adoption of a granddaughter. The 5-year-old has been part of the family since she was 5 months old, her adoptive father testified.

When they took a family portrait in the courtroom, the child held a painted sign that said, “For 2,069 days I’ve shared their love & home. As of today, I now also share their last name.”

A 9-year-old boy was adopted by the foster family who had him since he was 10 weeks old.  He has been in foster care most of his life: 3,285 days. He and his adoptive parents and siblings wore matching t-shirts that said, “Heaven sent. Court approved. Forever loved.” The date the family bonds became official was at the bottom – Dec. 13, 2021.

Judge Wise Martin told the children that she hopes that they feel like superheroes.  Their adoptive parents picked them. And after all, Superman and Spiderman were adopted.

Resident Jurist John N. Hudson, who handled many of the cases as an appointed Special Judge in Hinds County Youth Court, said that the families who opened their arms and their homes are heroes. “They are parents who filled the gap at a time of greatest need. They are the safety net that protects our children…. They didn’t have to do any of this. They took this on when those children were in greatest need.”

Judge Hicks and Judge Hudson have worked with the Department of Child Protection Services for the past year and a half to achieve permanency for the children and families. Judge Hudson was appointed by the Supreme Court to deal with older Hinds County cases so that Judge Hicks could keep up with a heavy docket of recently filed cases.

Judge Hicks said after the ceremony, “We are delighted to see this day come for these children and their forever families.” She noted that many of them had spent years in foster care.

Department of Child Protection Services Commissioner Andrea Sanders told the crowd of more than 50 people at the adoption ceremony that she is pushing to improve accountability so that children can achieve permanency sooner.

Sanders said, “No matter how good we get at our jobs, state agencies will always be a poor substitute for a family, so getting children into families with permanency has to be our highest priority.”

Sanders said that she was born to a young single mother who couldn’t afford to care for her. She was adopted as an infant. Her adoptive parents had adopted another child before her, then later had two biological children.  “I’m here to tell you that family matters,” Sanders said. “Today is a really joyous day.”