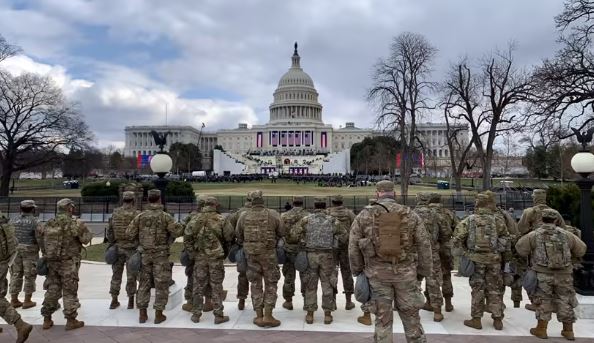 Image courtesy of the Chief of the National Guard Bureau

Last night, the nation was shocked to learn that the National Guard was moved to a parking garage, but have since been relocated back to the Capitol Complex.

According to Lucas Tomlinson with Fox News, a U.S. Defense official confirmed it was the Capitol police that asked the National Guard members to move their rest area.

Senator Cindy Hyde-Smith and Governor Tate Reeves have confirmed that no Mississippi troops were involved in the relocation.

“I want to assure everyone that, with the exception of specific times on Inauguration Day itself while the swearing-in ceremonies were underway, the United States Capitol police did not instruct the National Guard to vacate the Capitol Building facilities.  And on Inauguration Day, the Guard was notified and encouraged to reoccupy the spaces in the Capitol and CVC at 2 p.m.

“Over the past several days, the U.S. Capitol Police has been working tirelessly with its Congressional stakeholders to identify appropriate accommodations across the entire Capitol complex for their use.

“It was brought to our attention early today that facility management with the Thurgood Marshall Judicial Office Building reached out directly to the National Guard to offer use of its facilities.

“As of this morning, all Guardsmen and women have been relocated to space within the Capitol Complex.  The Department is also working with the Guard to reduce the need for sleeping accommodations by establishing shorter shifts, and will ensure they have access to the comfortable accommodations they absolutely deserve when the need arises.”

Governor Tate Reeves said, “The troops that were relocated to the parking garage floor in DC were not Mississippi National Guardsmen and women.  Regardless of where they were from, it is not okay to have these brave men and women ordered out of the Nation’s Capitol and sent to the garage floor. The mission these troops were on is wrapping up and we are looking to get our troops home as quickly as possible.”

UPDATE: The Mississippi National Guard has stated that the 114th will arrive home Saturday.

Here is what Mississippi’s delegation has to say:

Congressman Michael Guest said, “I cannot thank our men and women of the military enough for their service to our nation. I was shocked by their treatment in DC this week. Whoever is responsible must be held accountable. This should have never happened.”

Congressman Steven Palazzo stated, “Speaker Pelosi is responsible for operations on the Capitol grounds, and while guard members have been let back into the building now, I will be seeking answers as to why our servicemembers were disrespected in such a way. Seeing fellow guardsmen who have dropped everything in their lives to protect the sacred halls of Congress being kicked out of the building without explanation is shamefully unacceptable. These men and women representing every corner of this country deserve our unending praise, not to be pushed into a parking garage with a light pat on the back.”

The following is a statement from Senator Cindy Hyde-Smith spokesman: “Senator Hyde-Smith greatly appreciates the National Guard and the support it is providing to the security of the U.S. Capitol Complex.  The Senator was deeply concerned about reports of Guardsmen being relocated from the Capitol.  Senator Hyde-Smith is looking into those reports and working to ensure all Guardsmen stationed at the Capitol, including those from Mississippi, receive the best accommodations possible.”

Congressman Trent Kelly said, “The National Guard did an outstanding job protecting our Nation’s Capitol. These men and women answered the call to serve as they always have – at a moment’s notice. They deserve to be treated with honor and respect, rather than shuffled into a parking garage with limited facilities. We will do everything in our power to determine the source of these decisions.”

News Mississippi reached out to Congressman Bennie Thompson, but he had no comment.

The Republican Conference in the United States House of Representatives also issued a statement this morning:

We are grateful for the @USNationalGuard for their tireless work to protect the Capitol and keep us safe.

What happened last night was a disgrace.

Thursday, Senator Roger Wicker and his wife, Gayle, were able to spend some time with members of Mississippi’s National Guard who are currently deployed in Washington, D.C.

“You are actually here to defend the Constitution of the United States of America and to make sure that our example of civilian control of the government and the rule of law is adhered to and honored,” Wicker said.

“I just couldn’t be any prouder of … all of you,” Wicker continued. “We just wanted to come by and express our gratitude for upholding something that is sacred and something that the whole world looks to.”

Wicker met with dozens of soldiers from the 114th Military Police Company, based in Clinton, Miss. The Mississippi National Guard deployed approximately 100 guard members in preparation for the 59th Presidential Inauguration that took place on January 20.