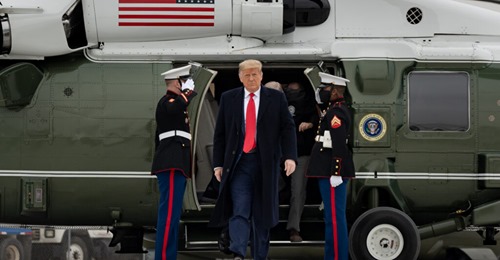 Before leaving office, former President Donald Trump granted pardons or commuted the sentences of 143 people, four of which are from Mississippi.

An earlier statement from the White House, which has since been removed, listed the four men as:

Joey Hancock — President Trump granted a full pardon to Joey Hancock. Senator Roger Wicker, and Mr. Hancock’s employer, pastor, and other members of his community all support this pardon. Mr. Hancock was convicted for conspiracy to possess with intent to distribute a controlled substance. Following his release from prison, Mr. Hancock has been a hard-working employee and active in his church and community.

Dr. Robert S. Corkern — President Trump granted a full pardon to Robert S. Corkern. This pardon is supported by Senators Roger Wicker and Cindy Hyde-Smith, Governor Phil Bryant, and Dr. Michael Mansour. Dr. Corkern was convicted of Federal program bribery. This pardon will help Dr. Corkern practice medicine in his community, which is in dire need of more doctors as it has struggled to keep up with the demand for emergency services. Dr. Corkern served in the Mississippi Army National Guard and has generously provided his services to low-income patients.

David Lamar Clanton – President Trump granted a full pardon to David Lamar Clanton. This pardon is supported by Senator Roger Wicker, Alton Shaw, Mark Galtelli, and Terri Rielley. Mr. Clanton was convicted of false statements and related charges. Mr. Clanton’s supporters testify to his contributions to the community, especially with respect to issues surrounding rural healthcare. Mr. Clanton has been active with 4-H Clubs and other organizations in his community.

Steven Benjamin Floyd — President Trump granted a full pardon to Steven Benjamin Floyd. This pardon is supported by Representative Mark Green. Mr. Floyd joined the United States Marines Corps at age 17 and earned a combat action ribbon in Iraq. He pled guilty to one count of bank robbery by extortion. Since his release from prison in 2009, Mr. Floyd has exemplified the power of second chances, and is raising a family and owns a successful car repair business. Mr. Floyd’s dedication to service includes helping extinguish fires set during the recent unrest and repairing widows and disabled veterans’ cars free of charge. President Trump thanks Mr. Floyd for his past military service and for his commitment to his community.