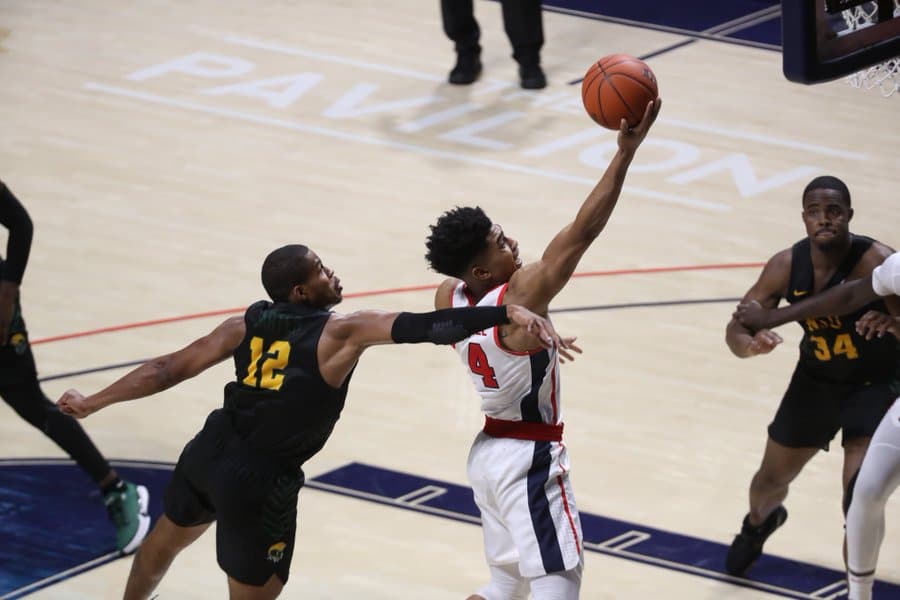 OXFORD — Ole Miss slogged past a feisty and well-coached Norfolk State team to the tune of a 68-55 win at The Pavilion on Saturday night.

Senior guard Breein Tyree rectified a sluggish 2-of-9 performance in the season opener by pouring in 21 on points on 8-of-18 shooting. Head coach Kermit Davis noted after last Friday’s win that Tyree’s struggles stemmed from him settling for perimeter jump shots. He was more aggressive in getting to the rim in this game even with eight three-point attempts.

“He has to be who he is,” Davis said. “He has to shoo step-in threes and fast-break three’s. He is really good on the move. He has been settling. He needs to get to the rim in transition. I knew he would be better tonight.”

Tyree is a good shooter, but his game is most effective 18-feet an in, using that aggressiveness a the rim to compliment one of the best mid-range games in the SEC.

Norfolk State gave Ole Miss all it could handle for roughly 30 minutes. The Spartans trailed by five with 10 minutes to go in the game. Their backcourt regularly beat the Rebels off the dribble and the first zone look Davis has shown all season helped thwart guards Jermaine Bishop and Joe Bryant from getting to the rim.

“I thought changing to our 1-3-1 into our 2-3 zone was the difference,” Davis said. “That was really the first time we have had to go to it. It slowed things down. They couldn’t drive the ball on top of us like they were able to in the first half.”

K.J. Buffen is becoming an offensive force He reshaped his body in the offseason, added muscle and is blossoming into a cookie-cutter four-man. He whipped Norfolk State in the high post, precisely where a four should thrive.

“I am a lot stronger so it has been easier,” Buffen said. “I am a lot more comfortable. I spend a ton of time working my touch around the rim.”

Buffen looked timid at times last season and is still deathly afraid of taking bad shots, so much so that Davis has had to coax him into being more aggressive and shooting the basketball more. Aside from being better equipped physically to get to the rim and finish through contact, Buffen generally just looks like a more confident and well-rounded player. Davis has told buffet to emulate former Kentucky standout and Charlotte Hornets rookie P.J. Washington, a stronger scorer and rebounder with a similar body frame.

“He’s not PJ Washington right now, but that’s what last year I talked to him about,” Davis said. “That’s who I’d like him to be a version of in a couple of years. Strength, and he can take that ball at 17 feet and, boy, he can shoot it, or he could just drive it both ways and finish.”

Buffen has notched games of 23 and 16 points to start the year and pulled down 16 rebounds in the two contests.

This team is only two games into this season, but if you were to highlight an area that is still developing and not yet at the level it needs to be, it is the Rebels’ post play and the lack of scoring at the four and five spots. With newcomers Khadim Sy — who had seven rebounds and a basket in 25 minutes —and Sammy Hunter, or redshirt freshman Carlos Curry, the Rebels are a much different looking team in the frontcourt this year. That has not yet translated to production. Ole Miss was out-rebounded 17-15 in the first half, but finished with a 35-33 advantage in the game. But the offensive production hasn’t been there. Sy and Hunter in particular have struggled to score around the rim.

“They have to got to take the ball around the rim, in these types of games, and score and get fouled,” Davis said. “I thought they defended a little better in the second half.”

When Ole Miss inevitably gets Blake Hinson back, it will be easier to supplement a lack of production from Sy and Hunter for stretches by way of a small-ball lineup that features Buffen at the five and Hinson nat the four.  Davis has planned to deploy this lineup since the offseason but Hinson has been sidelined with a blood disorder.

“Just play two forwards like I did at Middle Tennessee a lot,” Davis said. “Two hard-playing guys that think and know how to run offense. We are not giving up on Khadim and Sammy by any means, but Blake will be able to provide us some depth there that will really help us.”

Ole Miss hopes to have Hinson cleared for contact within the next week and back playing by the end of the month.

It wasn’t a masterpiece, but Ole Miss locked down defensively and handled a fairly athletic team in the second half. The Spartans scored just 55 points and allowed just 43 points to Arkansas State, the fewest allowed by Ole Miss in five years. There is still work to be one offensively as the ball often ceases to move and the motion is stagnant, but the Rebels have the pieces in the front-court and a veteran backcourt to be a team that can win a game or two in the NCAA Tournament.

For now, the Rebels moved to 2-0 and host Western Michigan on Friday night.