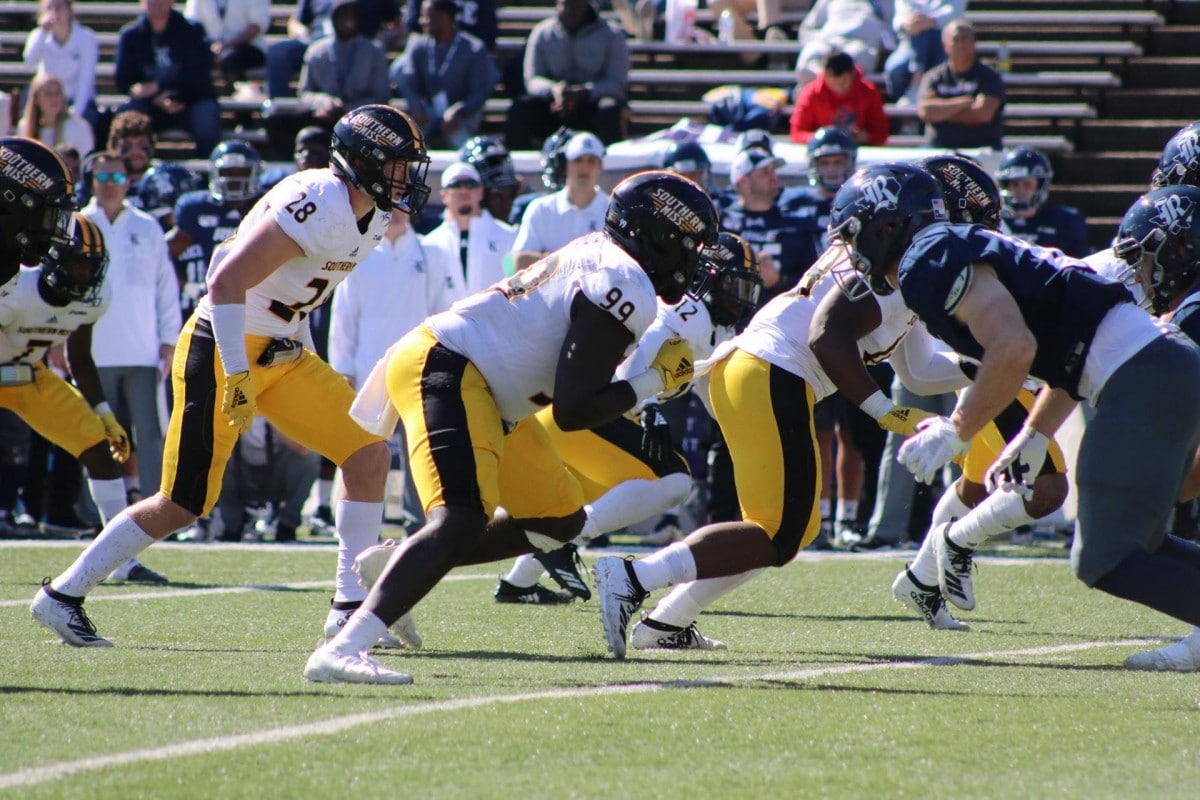 On a day when the Southern Miss offense struggled to get points on the scoreboard, the Golden Eagles’ defense rode to the rescue.

“Not the offense’s best day, but thought we played well on special teams for the most part and played well defensively.”

Junior running back Kevin Perkins scored the first two touchdowns of his Southern Miss career. Perkins, who finished with a career-high 86 yards on 13 carries, scored on a 2-yard run in the second quarter and a 38-yard run with 32 seconds to play.

Southern Miss (5-3, 3-1 C-USA) got a pair of field goals from freshman Andrew Stein to round out a stingy day where points were hard to find for both teams.

Junior quarterback Jack Abraham completed 23-of-36 passes for 207 yards with an interception. Abraham did not throw a touchdown pass in a game for the first time this season and only the second time in his USM career.

A scoreless first quarter set the game’s tone before the Golden Eagles jumped out to a 10-0 halftime lead on Stein’s 24-yard field goal and the shorter of Perkins’ scoring runs.

Southern Miss had to settle for a second Stein field goal, a 34-yarder, early in the third quarter before the momentum shifted.

Late in the third quarter, Rice (08, 0-4) intercepted an Abraham pass at the Southern Miss 29-yard line, and drove to the 2. But Green was picked off at the end zone by junior safety Ky’el Hemby.

The Golden Eagles then marched the length of the field, reaching first-and-goal at the Rice 4. But Southern Miss was denied by the Owls, and Stein missed a 27-yard field goal.

“That was a huge momentum swing,” Hopson said. “We gave it right back to them there, couldn’t get it in, then missed the field goal. But (Hemby’s interception) that was the play of the game.

“We played physical, played really well on defense, and we’re happy with the win.”

The teams traded punts until Perkins’ run in the final seconds.

Three Southern Miss running backs who had missed time with injuries appeared in the game, with senior D’Michael Harris gaining 41 yards on 12 carries. Harris had been knocked out of the previous week’s game at Louisiana Tech.

Sophomores Trivenskey Mosely and Steven Anderson each had a carry in the game. Mosely was hurt in the season-opener and Anderson has been in and out of games most the season.