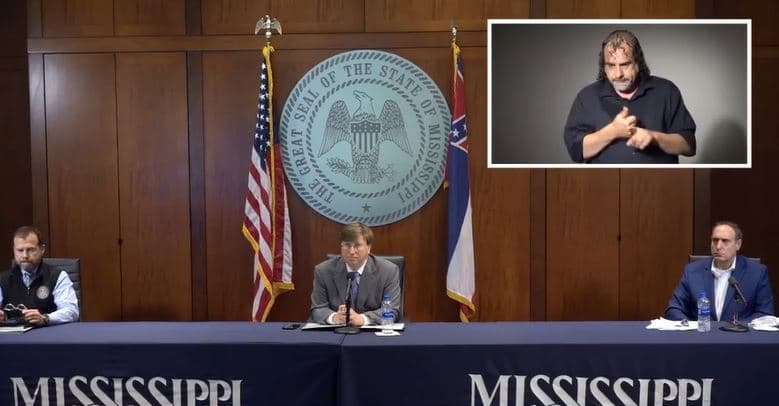 Governor Tate Reeves held another press briefing Wednesday afternoon to give an update on the current situation of COVID-19 in Mississippi and to discuss the state’s ongoing strategy to flatten the curve.

“We are still in the heat of this battle; we are still in the fight,” said Governor Reeves. “We are going to re-open more of our economy because we know we cannot keep all of this up forever. We cannot allow the curse to be worse than the disease.”

The Governor addressed the current battle with the legislature saying that there had been no final decision on whether he will veto the bill, allow it to become law, or take it to the courts.

The legislature will reconvene on Thursday to discuss plans to assist small businesses. The session is still set to officially resume on May 18th. However, Speaker of the House Philip Gunn has said that they will remain in session until they get the job done.

Reeves noted the 200,000 Mississippians out of work and the numerous small businesses and restaurants that have been unable to open their doors.
He also announced the decision to push back the state’s tax deadline to July 15th to match the federal reports.

During the press conference, the Governor addressed questions he has been getting in regard to churches and said that while the government cannot close churches, they are continuing to ask pastors to be smart and safe.

Reeves also highlighted the work corrections officers have done during the Covid-19 pandemic and said MDOC is working to sanitize their corrections facilities. They have also distributed masks and hand sanitizer to the officers and prisoners.

State Epidemiologist Dr. Paul Byers gave an update on the public health crisis with the report of 217 new cases and an additional 32 deaths. While several of the deaths were attributed to death certificate reviews, for the second day in a row, the death toll is the highest the state has seen in single day reports.

MEMA Director Greg Michel updated the public on PPE availability and said that his agency is working with the MS Department of Agriculture and Commerce. They recently received a large shipment of PPE  and have given the equipment to meat inspectors who are delivering them to all MS meat and poultry plants for the safety of the front-line food supply workers.