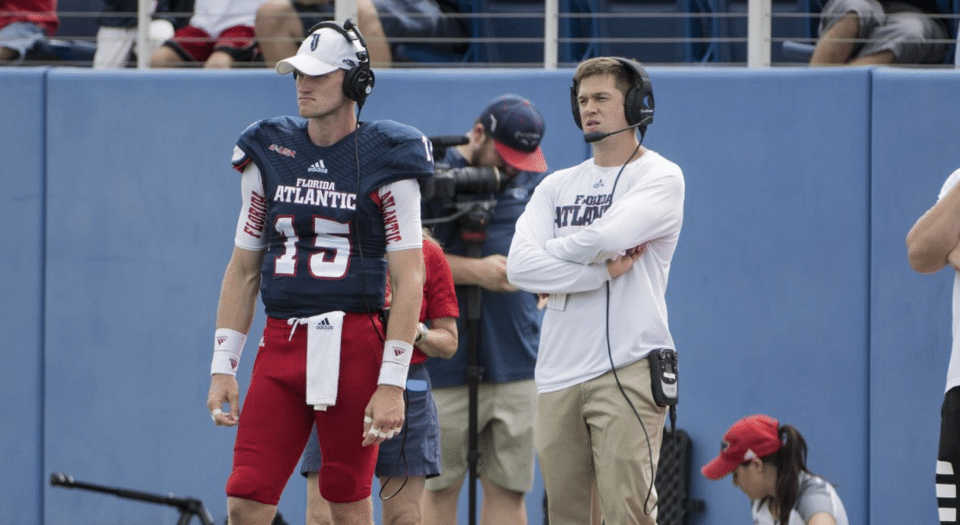 During their two seasons together at FAU, Charlie Weis Jr. and Lane Kiffin won 16 games, as well as a Conference USA championship (Photo from FAU Athletics)

Charlie Weis Jr. is no stranger to learning.

Ever since the incoming Ole Miss offensive coordinator was a kid, he’s always been trying to increase his football knowledge. As highlighted in an ESPN article from 2018, Weis has been wearing a headset on the sidelines since he was 14 when his father, Charlie Sr., was the head coach at Notre Dame.

While some traditional Notre Dame fans turned their nose up at the idea of a teenager helping out with the Irish football program, it didn’t seem to take too much of a toll on the Weis father-son duo.

Since then, Weis has learned under the likes of Will Muschamp, Bill Belichick, Nick Saban, Steve Sarkisian, and Lane Kiffin — who recently convinced the 28-year-old to come to Oxford and lead what’s been an explosive Rebel offensive unit over the last two seasons.

But before he takes full control of the offense, guess what he’s doing. Continuing to learn.

In Thursday’s episode of Reb Talk, Kiffin informed David Kellum that Weis is with the team in New Orleans and sitting in on offensive meetings with outgoing offensive coordinator Jeff Lebby as the team prepares for its January 1 Sugar Bowl matchup against Baylor.