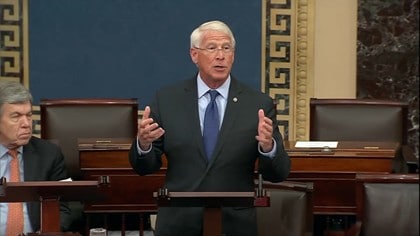 Image courtesy of the Office of U.S. Senator Roger Wicker

Wicker noted stark differences between the Schumer bill, which would legalize abortion in all 50 states up until birth, and several European countries, which have stricter abortion laws than even Mississippi’s 15-week abortion ban. The Mississippi senator cited scientific advances as well as shifting public opinion in favor of life as reasons for Democrats to abandon this legislation.

Read the full speech as delivered below or watch here.

I thank the Senator from Indiana and join him and my other colleagues in decrying the legislation that we will be asked to move to the floor tomorrow.

But before I speak on the substance of the bill, it needs to be reiterated why this bill is even before us.

The only reason we’re debating this bill today is because an extreme and unprecedented breach of protocol took place in the Supreme Court.

The leaked draft in the Dobbs case was a full-blown assault on the United States Supreme Court and on the independence of our judiciary.

And I do trust, based on the information we have about the nine justices, is that attempt will not be successful.

This is shameful, Mr. President. A Supreme Court justice should never have to fear for his or her safety, or the safety of their families for doing their jobs.

The leak and the mob- reaction should be condemned by both parties in the strongest possible terms. And yet, there have been very few voices on the other side of the aisle addressing this matter. Certainly, the Majority Leader of the Senate has not said a word about the outrage of the leak, or the mob protests, nor has the President of the United States.

What happened to respect and care for our institutions?

Instead of protecting the Court, our Democratic friends seem to be, whether inadvertently or not, legitimizing this attack on the Court by moving to consider extreme legislation, which is out of touch with the mainstream of Americans.

And so now, let me speak briefly about the legislation. It has been said that this is a mere codification of the Court’s holding in Roe v. Wade.

That is, in fact, not the case. Instead, the bill that we will be asked to move to the floor tomorrow is an attempt to expand abortion dramatically across this county, to expand abortion in a way that only a small handful of the most repressive governments on the face of the Earth permit.

The bill would eliminate even the most modest protections for unborn children across all 50 states. It would force all 50 states to allow gruesome late-term abortions, that even the political left all over Europe have long ago outlawed.

The nation of Portugal generally bans abortion after 10 weeks. Of course, as we know, the Mississippi law that brought this case to the Supreme Court, the Dobbs case, has a slightly more permissive provision than even these friends that I just mentioned from Western Europe. It would be a 15-week ban.

But what this bill that we were asked to vote on tomorrow, and which will certainly fail, would do is push America further outside of the global mainstream than we already are. And we already are way outside this mainstream.

Because of scientific advances, we know that an unborn child’s heartbeat begins at six weeks. We know a child can feel pain as early as 20 weeks.

Many of us, including my wife and I, have put the sonograms of our grandchildren, have displayed them on our refrigerators in our homes. What we know about the development of children, their faces, their eyelashes, has brought about a change in the minds of many Americans.

In 1996, 56 percent of Americans called themselves pro-choice. Only 33% said they were pro-life.

But because of science, and because of those sonograms, and because of what we know about their ability to feel pain, their movements, their eyes blinking, their eyelashes – today, the two sides are just about evenly split, pro-choice and pro-life.

Our friends on the Democratic side should think about that.

I hope our Democratic friends across the aisle think about that before they vote for this extreme piece of legislation, brought by the Democratic leader, which would put us in league with the People’s Republic of China, with all of their respect for life. With North Korea, with its deplorable record of respecting human life. With those two countries, and five others on the extreme left. It would put us in league with them.

That’s not where the American people want us to be, Mr. President. If a state has a 24-hour waiting period, for example, the Schumer bill tomorrow would outlaw that. Taxpayer-funding of abortion. The Hyde Amendment, which prohibits this and has done, so for decades and decades, would be abolished.

The parental rights of teenage girls to have a say and to be able to counsel their daughters on the pivotal decision about having an abortion would be eliminated by this.

Is that what my colleagues on the other side of the aisle are hoping for? It’s what they would get if the Schumer bill were to pass.

Mr. President, this is not a serious attempt at consensus building. This bill simply reflects, regrettably, the iron grip that Planned Parenthood has on one of our major political parties in this country.

We will reject this effort tomorrow. I commend my colleagues who intend to stand with the American people, and vote no on this attempt to rank us with the worst regimes on the face of the globe, and impose late-term abortions on the entire country.

I yield the floor, Mr. President.

This day in Mississippi: Johnny Cash arrested in Starkville