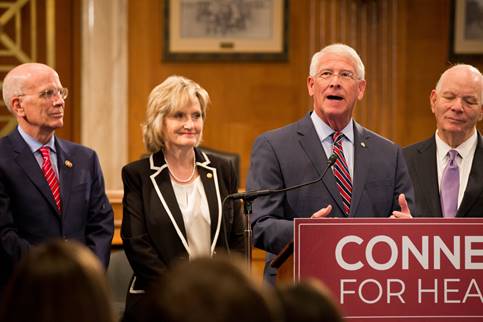 On Tuesday, Senators Cindy Hyde-Smith and Roger Wicker voted in favor of the “Honoring our Promise to Address Comprehensive Toxics Act of 2022” (PACT Act), which would expand Veterans Affairs (VA) benefits to veterans who have been suffering from chronic health issues associated with being exposed to toxins.

The PACT Act would modernize the claims process the VA uses to provide health care and benefits to toxin-exposed veterans. Under its present structure, the VA currently denies at least 70 percent of disability claims related to burn pit exposures based on a lack of evidence, scientific data, and information from the U.S. Department of Defense.

Senator Cindy Hyde-Smith supported the legislation because she believes in fulfilling a promise that the nation has made to honor its veterans.

“The existing VA disability claims system leaves veterans without the care they need to battle illnesses linked to exposure to toxic hazards from burn pits and other dangers. The Honoring Our PACT Act will at long last begin to fix this shortcoming,” Hyde-Smith said. “This legislation, while not perfect, is meritorious and another step toward fulfilling the promises we’ve made as a nation to our veterans and their families.”

While Senator Wicker voted in support of the legislation, he previously joined 40 Senate Republicans in requesting a change to the resolution to amend a $400 billion budget loophole with what he believes to be unrelated spending. The suggested measure failed to meet the required 60-vote threshold in the Senate.

“The PACT Act is an important step forward for veterans who have been denied their benefits for too long, and I look forward to seeing it passed without further delay,” Wicker said. “I appreciated Senator Pat Toomey for leading the effort to help make this legislation better for veterans and their families who do not want to see the federal government use their cause to spend billions on unrelated priorities. Senate Republicans will continue our efforts to ensure these funds are spent only on veterans.”

The final 86-11 vote in favor of the PACT Act followed a series of failed votes on amendments, including the one supported by Wicker, to close perceived loopholes within the legislation.