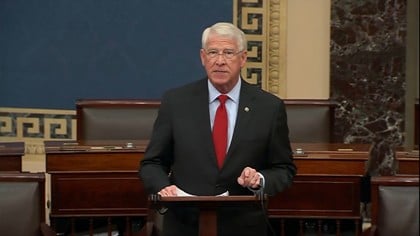 Mississippi Senator Roger Wicker is blasting the Biden Administration’s plan to mandate COVID vaccines for our military.  Wicker–who serves on the Senate Armed Services Committee–joined Senator Roger Marshall and several other colleagues in introducing legislation that would prevent the Dept. of Defense from taking adverse action against active service members that refuse to take the vaccine.

“We’re all in it together, and we need all the help we can get,” Wicker said of the state of the armed forces. “We certainly don’t need to be losing our best and our brightest and our bravest from the force at a time like this.”

The Biden administration has refused to rule out other than honorable discharges for service members to decline to take the vaccine, even as thousands of troops oppose a department-wide vaccine mandate. Other service members have taken up legal challenges to the mandate, citing potential infringements on their constitutional rights.

Wicker has expressed concerns that this could could contribute to a readiness crisis in the military, and pose a danger to our national defense.

Wicker expressed concerns over vaccine mandates in general during an interview with SuperTalk Mississippi this morning.  He continues to support efforts aimed at blocking the mandates from going into affect.