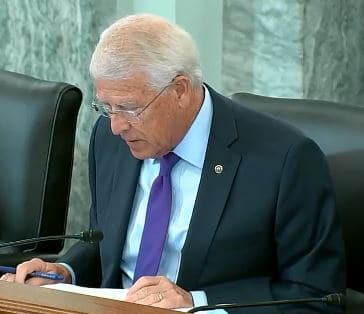 Legislation that clarifies that the President cannot use climate change as the basis to declare a national emergency is being introduced by Mississippi Senator Roger Wicker and 10 other Republican senators. The ‘Real Emergencies Act’ would prohibit the President from using the 3 primary statutory authorities available to him (the National Emergencies Act, the Stafford Act, and section 319 of the Public Health Service Act) to declare a national emergency solely on the basis of climate change.

“Energy is critical to our national security. President Biden should be unleashing the untapped potential of America’s natural resources to lower gas prices and make us safer,” Wicker said. “Instead, Democrats are pushing harder on their radical environmental agenda by calling for a totally unwarranted state of emergency. This would put our nation at a further disadvantage at a critical juncture. I am glad to join my friend Senator Capito on legislation to ensure executive authorities are not misused for political purposes.”

“Right now, Americans are paying astronomical rates at the pump—with our country having already surpassed the highest recorded average gas price ever. Instead of addressing this problem head on and promoting policies that encourage American energy independence, President Biden and his administration would rather ignore these problems. In the meantime, they are coordinating with extreme environmental groups behind the scenes to lay the groundwork to implement the administration’s zealous climate agenda by declaring a ‘national climate emergency.’ Our legislation would ensure the president cannot use made-up powers to circumvent Congress and govern by executive overreach,” Ranking Member Capito said.

Read more about the bill here.