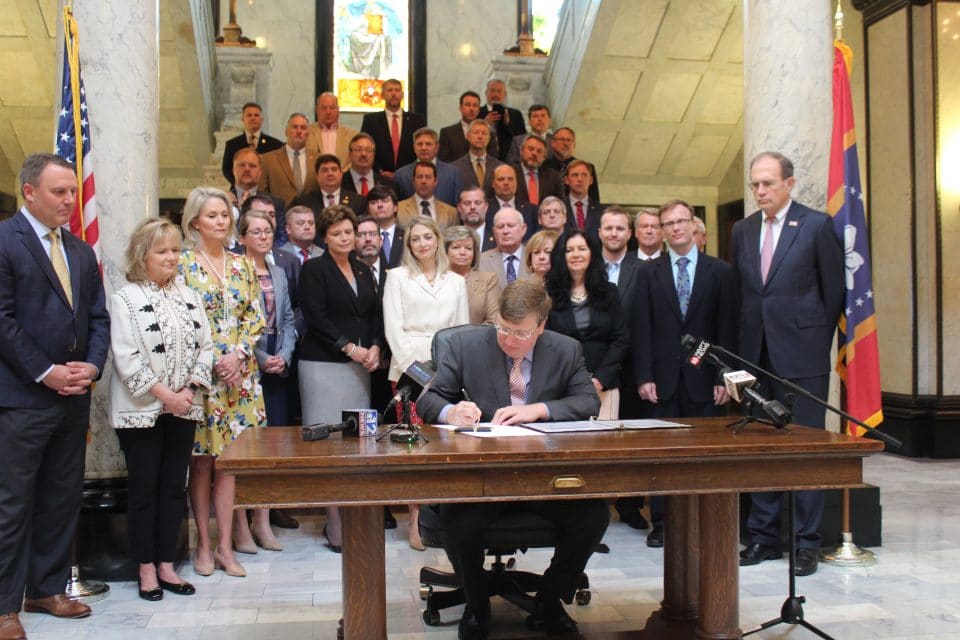 In the rotunda of the capitol Thursday morning, Governor Tate Reeves put pen to paper as the ‘Mississippi Fairness Act’ is set to become law.

Authored by Senator Angela Hill, the legislation bars biological men from competing in women’s sports in the state of Mississippi. Referencing his own three daughters, the governor explained his belief that the participation of transgender athletes presents an unfair challenge to biological girls who wish to join sports teams.

“It sends a clear message to my daughters and all of Mississippi’s daughters that their rights are worth fighting for…This legislation will work to create a fair playing field for the female athletes of our state,” Governor Reeves said before signing the bill.

During his opening remarks, he stated that it was an executive order signed by President Biden during his first days in office that led to the adoption of such a bill at the state level.

Senator Hill had previously shared a similar stance on President Biden’s order and its potential impact on young female athletes.

“What Biden’s administrative order is trying to do is say, women, you may matter in everything here and there, but you don’t matter and sports. I’m here to support all women that want to play sports,’ she said back in February.

According to the Mississippi Center for Public Policy, the bill has widespread & bipartisan support with 79% of registered Mississippi voters backing such legislation. 87% of Republicans support the legislation, along with 83% of Independents and 65% of Democrats.

With the ACLU of Mississippi issuing a strong statement against the act the governor believes that the bill would prevail should it be challenged in court.

“It wouldn’t surprise me at all if we are sued. That being the case, I don’t think I’ll spend much time opining on our chances in court. What I do know is that we will defend vigorously our rights to make these state laws, particularly given the fact that the executive order signed by the president was in fact just the stroke of the pen by one individual, and it’s not a federal law that passed by Congress,” he said.

The bill was brought forward in Mississippi, with similar bills being introduced elsewhere, after transgender athletes in Connecticut captured 15 women’s track & field state championship titles and set 17 new individual meet records between 2017-2019. While there haven’t been any examples of this in Mississippi, the governor explained that this bill is now in place to prevent that from happening in the future.