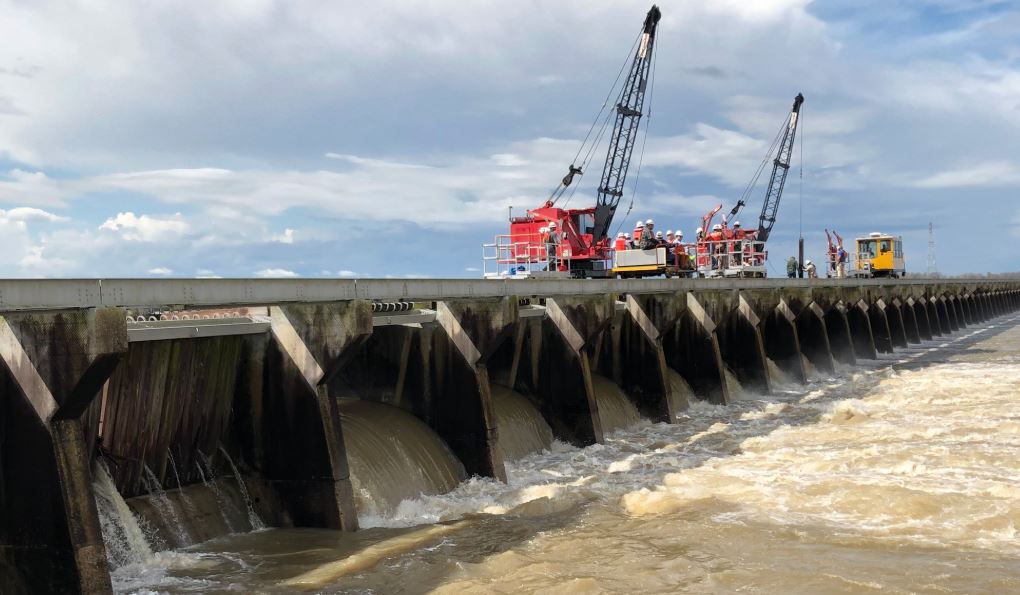 Photo from the U.S. Army Corps of Engineers

The US Army Corps of Engineers has announced that the Bonnet Carré closure will begin when it reaches 15.5 feet. This will allow crews to safely close bays and the closing date is based on the forecast from the National Weather Service who say the process could start as soon as the 2nd or 3rd week of July.

“When they close it then it will still be another 10-12 days that fresh water will still be coming into the gulf because it takes that long from the time it leaves the Spillway to get to us,” said Joe Spraggins, Executive Director of the Mississippi Department of Marine Resources. “We will be seeing an effect probably until the end of July for sure.”

Prior to this year, the longest opening of the Bonnet Carré on record was 1973 for 75 continuous days. During the peak of that event the structure was fully opened, all 350 bays, and passing a discharge of 250,000 cubic feet of water per second. As of today, between the two openings of the Bonnet Carré Spillway, the structure has been opened for a total of 91 days this year. Both of the openings this year were partial openings. The first one (44 days) had 206 bays open during the peak, while the second opening (48+ days) at the peak had 168 bays open.

“It is important to note that we are in the wettest period on record in 124 years and that the Mississippi River drains 41 percent of the contiguous United States,” said Matt Roe, Public Affairs Specialist with the New Orleans USACE.  “Rainfall and snowmelt across the Mississippi Valley ends up in the river. Here in New Orleans, we’ve been in a “flood fight” for 245 days and counting. A flood fight means we are out inspecting the levees with our local partners and constructions restrictions are enacted within 1,500 feet of the levees. The previous record for the longest flood fight was in 1973 at 225 days.”

To put the amount of water in perspective, Roe gives an example of the New Orleans Super Dome which has an interior space of 125 million cubic feet.

“The trigger point to open Bonnet Carré is a flow of 1.25 million cubic feet per second, so when we are at a point to open Bonnet Carré the river could fill the Super Dome in 100 seconds, or 36 Super Domes in an hour,” said Roe. “There are 7.47 gallons in a cubic foot. When we are at a point of needing to operate the Spillway we are passing 9.337 million gallons of water every second, imagine 9 million milk jugs going by every second. It is a tremendous amount of water.”

During the time that it has been open, the fresh water pouring in from the Bonnet Carré is the suspected cause of over 100 dolphin deaths in Mississippi alone and over 200 along the Gulf Coast.

The Department of Marine Resources has said that recent reports show brown shrimp and oyster populations have been depleted due to the opening of the Spillway.

Spraggins said once the spillway is closed, the salinity of the water will start to return to normal, but oysters will have to be replanted because there has been an almost 100% mortality rate there. It will likely take 2-3 years for the Oysters to get to market size and then another 2-3 years before they will be back to anywhere close to where they were before the opening of the Spillway.

As for the shrimp, Spraggins says they are seasonal so the next season should be business as usual along with speckled trout and redfish that will start making their way back to the area almost immediately.

There have not been any dolphin deaths or strandings reported in the past week and Spraggins says they are still looking into the cause of the dolphin strandings to ensure that it isn’t something other than the changing salinity of the water due to the Spillway opening.

Davis pleased with how Rebels are evolving in offseason