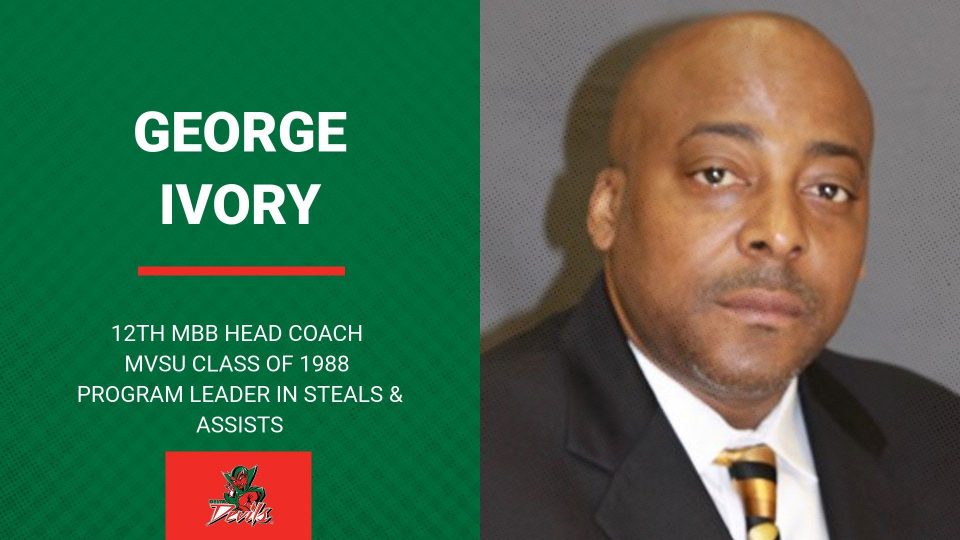 Ivory has a long history with the university, beginning in 1984 when he came aboard as a freshman on the men’s basketball team. During his four seasons in Itta Bena, he was selected as Freshman of the Year, First Team All-SWAC, SWAC Tournament MVP, and Player of the Year. He still holds school records in assists, steals, and minutes played.

“Coach Ivory brings a wealth of knowledge to our basketball program as our 12th men’s basketball coach,” Dr. Jerryl Biggs, MVSU president, said. “We are excited about what he will bring to our program as an alum who has experienced great success during his time as a coach in the SWAC.”

After graduating in 1988, Ivory tried out for the Chicago Bulls, Harlem Globetrotters, and Illinois Express before ultimately being drafted by the Wyoming Wildcatters of the CBA.

He later went back to school, this time to Jackson State, in order to attain his master’s degree. While at JSU, Ivory served as a graduate assistant with the women’s team before being hired as a full-time assistant in 1991. In seven years as an assistant coach, Ivory helped the Tigers win two SWAC Tournaments as well as one regular-season championship.

The University of Arkansas at Pine Bluff then hired Ivory as an assistant coach for the men’s team. In 2006, the Golden Lions made it to the the finals of the SWAC Tournament. Following the 2005-2006 season, he went to Grambling State for one year before returning to Valley as an assistant coach. During the 2007-2008 season, the Delta Devils won the SWAC Tournament, earning the team an automatic bid to the NCAA Tournament.

On March 27, 2008, Ivory was named the head coach at Arkansas-Pine Bluff. In 13 seasons with the Golden Lions, he compiled a 140-269 record and one NCAA Tournament appearance. He was named the HSRN National Coach of the Year in 2010.

In 2021, he once again returned home to Itta Bena as the Director of Alumni Relations in the Office of Alumni Affairs.

Ivory will now look to take the Delta Devils, who went 2-26 last season, back to the NCAA Tournament for the first time since 2012.

Mississippi ranked as one of the best states for doctors