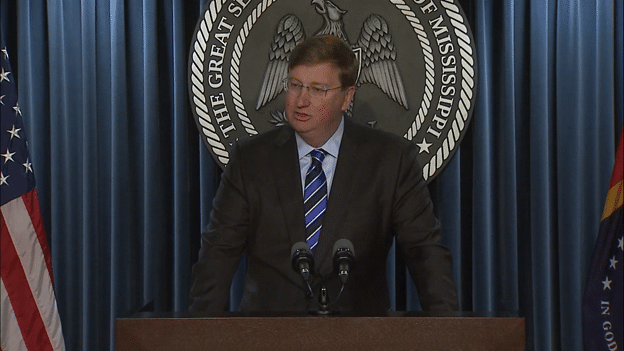 Governor Tate Reeves has officially responded to a letter sent by U.S. Representatives Bennie Thompson, D-Miss., and Carolyn Maloney, D-NY., that raised concerns over the state’s funding of Jackson’s water systems amid the crisis that left over 150,000 residents under a boil water alert for 48 days.

In his response, the governor states that Jackson has received all funding requested and a disproportionate amount when compared to the other water systems of the state, especially through the Drinking Water State Revolving Fund (DWSRF). Reeves also alleged that the state has never denied an application for a DWSRF loan from Jackson.

“My administration is deeply committed to ensuring that all federal funds received by Mississippi for drinking water systems upgrades have been in the past and will continue to be in the future made available and distributed among Mississippi’s more than 1,100 water systems on an objective and race-neutral basis,” Reeves wrote. “The City of Jackson has received considerable funding over the years. Specifically, in FY 2021, Jackson was awarded assistance from the DWSRF in the amount of $27,953,300, that is 68.4% of total funds disbursed, and over 93% of the total amount to large communities (population greater than 10,000) throughout the entire state of Mississippi.”

The governor’s response noted that the United States Department of Justice, on behalf of the Environmental Protection Agency, issued a letter to Jackson expressing its intention to file an action against the city under the Safe Drinking Water Act and how the EPA chastised the city of Jackson for its inability to effectively operate the plant and provide clean drinking water to its residents.

“The DOJ asserted that the City failed to protect public health by the following: (1) Failure to adequately staff water treatment plants with Class A operators, (2) Failure to implement an Alternative Water Supply Plan pursuant to the Administrative Order, (3) Failure to comply with the timeline for general filter rehabilitation pursuant to the Administrative Compliance Consent Order, (4) Failure to install corrosion control pursuant to the Lead and Copper Rule, (5) Exceedance of the haloacetric acids five maximum contaminant level, and (6) Exceedance of single turbidity limits. The letter requested the City immediately enter into negotiation with the DOJ regarding the recent drinking water crisis,” Reeves said.

Reeves also pointed out that Congressman Thompson had expressed similar concerns regarding Jackson’s leadership and transparent planning on the water issue by citing Thompson stating, “I know there’s a water problem with the City of Jackson, but nobody has shared the facts on the problem with me. When we don’t see the plan for that investment, there is a reluctance to invest on it. You can’t just say ‘we need money.'”

The full letter from Reeves can be found here.