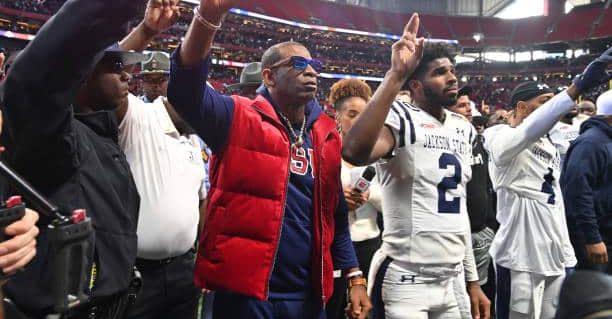 The Tigers (12-1, 8-0 SWAC) accomplished the feat of going undefeated in the regular season and continued their success with a SWAC Championship victory to extend the winning streak, but were just shy of the perfect trifecta in the very last game of the Deion Sanders era.

From the onset of the game, North Carolina Central, the MEAC champion, came out swinging. The Eagles struck first with a quick 10-0 lead, forcing Coach Prime to make adjustments. Jackson State responded with a pair of touchdowns, one being an 85-yard pass from Shedeur Sanders to Kevin Coleman, to give JSU their first lead of the game.

JSU led 21-17 at the half, but the Eagles continued to be aggressive, and even tricky. The Tigers forced NC Central into a fourth down situation on their own side of the field early in the third quarter, but a fake punt turned into a 43 yard gain, with a touchdown following to give NC Central a 23-21 lead.

NC Central followed up their touchdown with a field goal on their very next possession and began to take control of the game. Shedeur Sanders responded with a crucial touchdown pass to Travis Hunter to reclaim the lead. However, a failed 2-point conversion attempt would limit the Tigers’ momentum.

Throughout the game, Jackson State struggled to limit NC Central’s ground attack. The Eagles continued to exploit a weakness in the Tigers’ defense and found the end zone with a rushing touchdown to take a 34-27 lead with 4:31 left in regulation.

While it appeared that the Eagles had essentially won the game with that drive, the Tigers were not done fighting. The JSU offense marched down the field, accomplished a fourth down conversion, and Sanders found none other than Hunter to score a touchdown with 0:00 left on the clock to send the game to overtime.

In overtime, NC Central got the ball first and scored yet another rushing touchdown to take a 41-34 lead. Jackson State had an opportunity to send the game into double-overtime. The Tigers moved the ball down to the one-yard line, but a dropped pass by a wide open Hayden Hagler on third down and another incomplete pass on fourth down would cost JSU a consecutive Cricket Celebration Bowl championship title.

Despite Sanders’ spectacular performance, in which he went 27 for 35 with 329 yards and four touchdowns, Jackson State failed in other realms of the game. The Tigers were never able to run the ball efficiently and were inconsistent on third down, only converting four times in ten attempts. Additionally, JSU’s defense was outperformed by its opponent. The Eagles totaled 460 total yards, with 254 coming from the rushing game.

Now that the Coach Prime era of Jackson State football is officially over, wide receivers coach T.C.Taylor will take over as the team’s new head coach. He will be formally introduced in his new role in January.