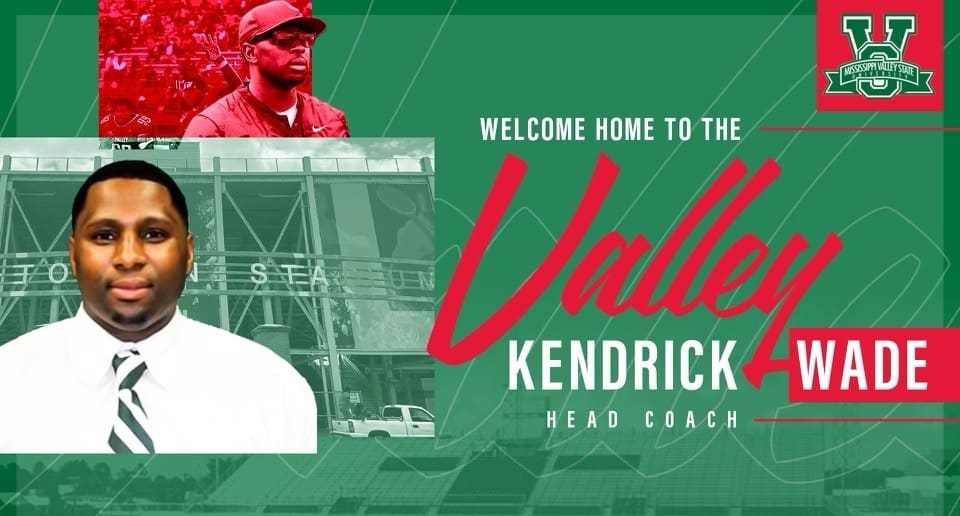 Wade, a Cleveland, Miss. native and MVSU graduate, will be taking over following the departure of former head coach Vincent Dancy, who recently joined Deion Sanders’ staff at Colorado.

Prior to being announced to his new position, Wade served as wide receivers coach at Delta State University. During the 2022 season, the Statesman averaged 41.2 points per game, 471.8 yards per game, and a National Division 2 playoff berth. Delta State finished the season with an 11-2 record and Gulf South Conference Championship.

“We were looking for a leader with a vision who could draw people into the program and towards him. Coach Wade has been working hard and paying his dues in the high school and college coaching ranks,” MVSU Athletic Director Hakim McClellan said. “He has demonstrated proven success as an assistant coach and what he has accomplished working with players over the years, and we believe he will do the same coming back home to The Valley.”

While at MVSU, Wade was named Most Outstanding wide receiver in 2004 and broke the school record for the longest receiving touchdown in school history, an 82-yard score versus Grambling. In 2016, Wade was named to MVSU’s All-Decade Football Team. After his playing days at MVSU came to an end, Wade went on to play four years of Arena football in Texas and Arkansas.

“I have dreamed of this moment; I saw it before it became a reality. I always felt I would have the honor of returning home to elevate this program to compete for championships, and that’s what we are going to do. I know it will not happen overnight, but the ‘Process’ of that elevation begins now. Valley, THE TIME IS NOW,” Wade said.