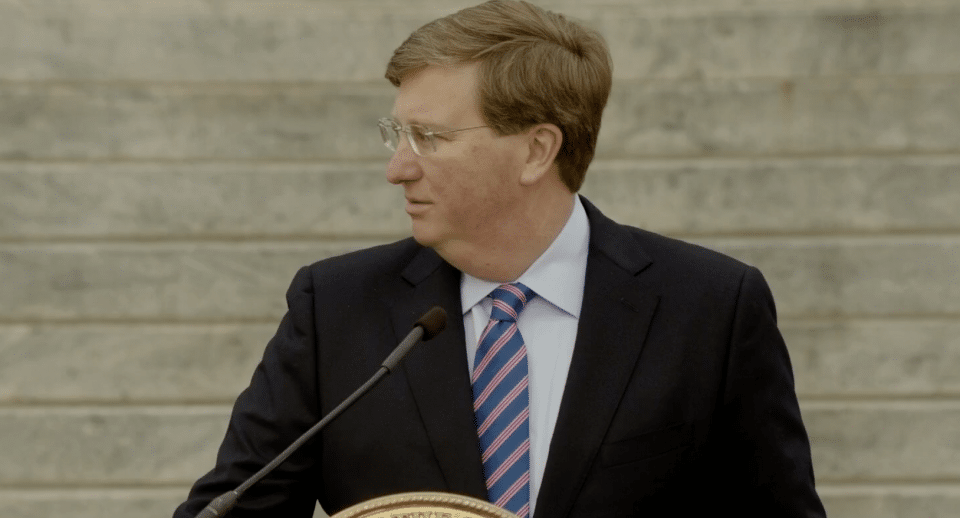 “After recession and pandemic and hurricanes and tornados, I can still stand before you tonight and declare—without reservation and without qualification—that the state of our state is not only strong but stronger than it has ever been.”

That was one of the opening lines from Governor Tate Reeves as he delivered the 2022 State of the State Address in front of the Mississippi State Capitol on Tuesday.

Reeves, a Republican in his third year in office, then touted the “crowning achievement” as of recent in Mississippi: the state’s education system.

“When you look at the data, it looks like a miracle. But, it is not a miracle,” he said. “It is the product of dedication of our teachers, a result of the intelligence of our people, and conservative, common-sense reforms enacted by many of us here today. And most importantly, it is achievement that was earned by Mississippi students.”

Mississippi high school students achieved a record-high graduation rate of 87.7 percent in 2019-2020. Students with disabilities also reached a historic number with a 55.4 percent graduation rate. Fourth grade reading in Mississippi jumped from No. 49 to No. 29, according to the National Assessment of Educational Progress.

Reeves then segued from educational statistics into the debate over critical race theory.

“Across the country, there is a looming threat in too many schools,” he explained, minutes after saying that he spends a bulk of his time swimming in data. “It is propaganda that seeks to divide us. It’s what’s called critical race theory…They teach students that by virtue of the color of your skin, you are inherently a victim or oppressor.

Just last week, the Mississippi Senate passed what a majority of the chamber deems to be an anti-CRT bill. The 32-2 vote came nine days after State Superintendent of Education Dr. Carey Wright told the Senate Education Committee that there’s currently no teaching of critical race theory in Mississippi schools.

Reeves subsequently moved his speech towards the topic of the state’s economy, saying that Mississippi is in the best fiscal shape in state history. At the conclusion of the most recent fiscal year, total revenue reports had the Mississippi State budget $1.05 billion above sine die estimates.

“Mississippi continues to be in the best fiscal shape and the best financial shape in its history. Mississippi ended the year a billion dollars over revenue estimates,” he said, adding that he thinks the elimination of the state income tax will only further that number. “By eliminating the income tax…we can throw out the welcome mat for the dreamers and the visionaries.”

The House of Representatives recently passed a bill that would phase out the state income tax while raising the sales tax. However, Reeves is not fully sold on the chamber’s proposal as he believes it’s possible to rid of income tax without raising taxes in other areas.

One of the most anticipated topics, which Reeves saved for the end of his address, was the deadly crime wave that has taken over the capital city.

During this past calendar year, Jackson was named America’s deadliest city with a homicide rate of 99.5 per 100,000 citizens. Reeves said the murder rate in Jackson triples that of Chicago while easily trumping the likes of Baltimore, St. Louis, and Memphis.

While the state does not have any control over the Jackson Police Department, it does fund Capitol Police, a unit of the Mississippi Department of Safety that’s in charge of protecting the boundaries of the Capitol Complex Improvement District.

In July, Reeves announced a public safety initiative, expanding Capitol Police’s patrol duties to Jackson State, Belhaven, Fondren, as well as the downtown area. On Tuesday, he called on legislators to allot enough funds to double the number of Capitol Police officers. Currently, there are 78 officers on staff.

“I’ve said it before and I’ll say it again, we have a lot of brave men and women in blue. There’s just not enough of them,” he said.

Reeves also encouraged legislators to give local police a $1,000 hazard pay bonus for working during the COVID-19 pandemic, replicating a bonus he authorized for nearly 1,750 state law enforcement officers back in December.

All in all, it was a busy address. You can watch it in its entirety below.