The countdown to election day is winding down and Mississippians will head to the polls to vote in not only the political races, but also on three key ballot measures that could have a major impact on the state.

After you make your way through the top portion of the ballot in Mississippi, which includes the Presidential election, a U.S. Senate race and House and State Supreme Court races, your job as a voter is not yet complete.

The final portion of the ballot is reserved for the three ballot measures that include the possible adoption of medical marijuana, a new state flag and a change to the way we elect statewide officials. Below, you’ll find a brief overview of each measure. 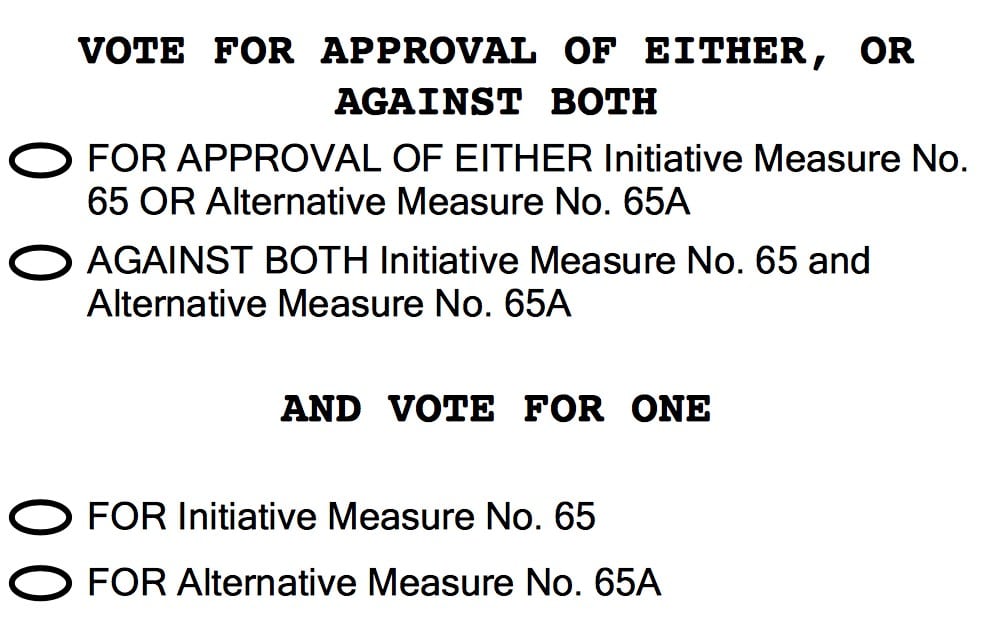 This ballot measure will be broken up into two parts. Prior to choosing between the two options (Initiative 65 or 65A), you’ll first be asked “Should Mississippi allow qualified patients with debilitating medical conditions, as certified by Mississippi licensed physicians, to use medical marijuana?” And, you’ll vote “for” or “against” either or both options.

Even if you vote against both options, you’ll still have to the opportunity to choose between the two in the second portion of the ballot measure. So, what’s the difference?

Initiative 65 was placed on the ballot following the circulation of a petition that garnered over 228,000 signatures and would amend the state constitution to include the allowance of medical marijuana. If passed, the initiative would establish a program to be administered by the Department of Health by August 2021 and would allow “doctors the option to certify patients with specific debilitating conditions listed in the initiative to receive medical marijuana as a treatment option.” 22 conditions are included, but language in the text seems to leave room for interpretation. This has been criticized by the MSDH, who has come out in opposition against the initiative, along with its potential inclusion in the constitution. This would mean that the MSDH nor the legislature could alter the program in any way.

65A was placed on the ballot by lawmakers in March with the passage of a resolution. If this option passes, the Mississippi Legislature would then be instructed to develop a medical marijuana program that would be limited to “persons who have terminal medical conditions as certified by health practitioners who are licensed under state law” while also limiting the number of products and dispensaries. No date is specified as to when this program would be up and running.

How it passes: If a majority of Mississippians vote in favor medical marijuana, election officials will then move on to the results of the second question. In order to be adopted, either measure then must receive a majority of the votes and no less than 40% of the total votes cast in the election. 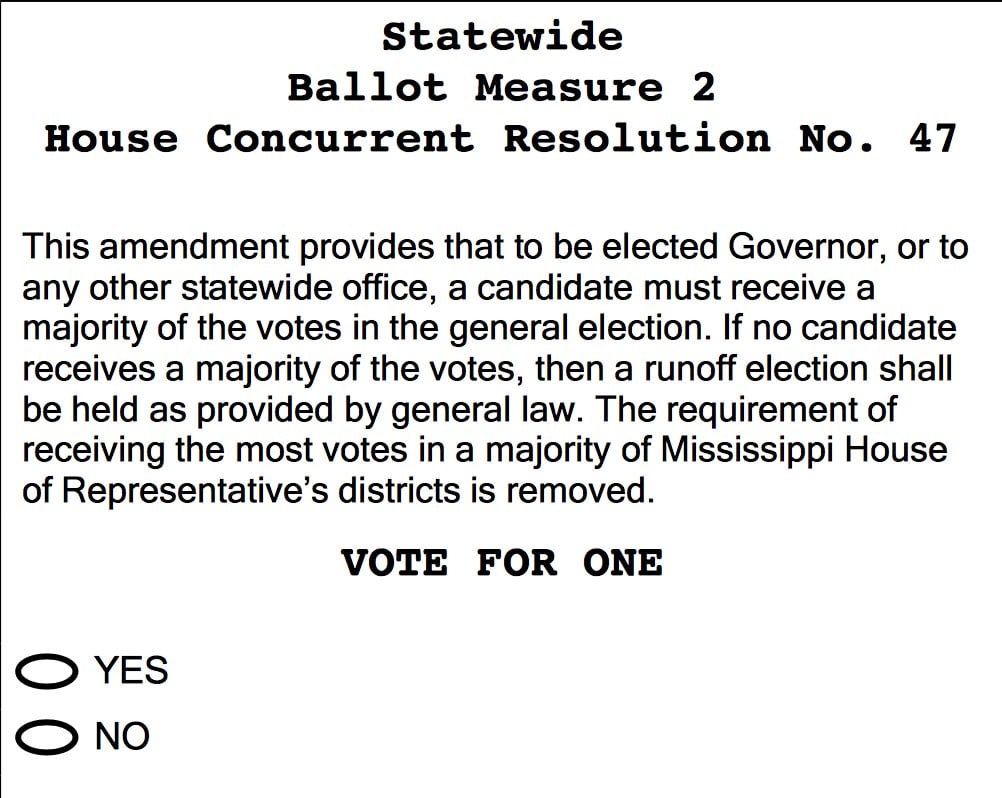 Currently, to win a statewide election in Mississippi (Governor, Lt. Governor, Attorney General, etc.), a candidate must win the popular vote while also earning the highest number of votes in a majority of the state’s 122 House districts. If this measure passes, the electoral vote requirement would be removed, and the race would result in a runoff if no candidate receives a majority of the vote on election day.

The measure was placed on the ballot following the filing of a lawsuit that alleged Mississippi’s current election laws violate the ‘Voting Rights Act.’ A court ruling mandated that the legislature act to remove the electoral college aspect of statewide races leading to the passage of a resolution which placed this measure on the ballot.

This measure requires a simple majority in order to pass. 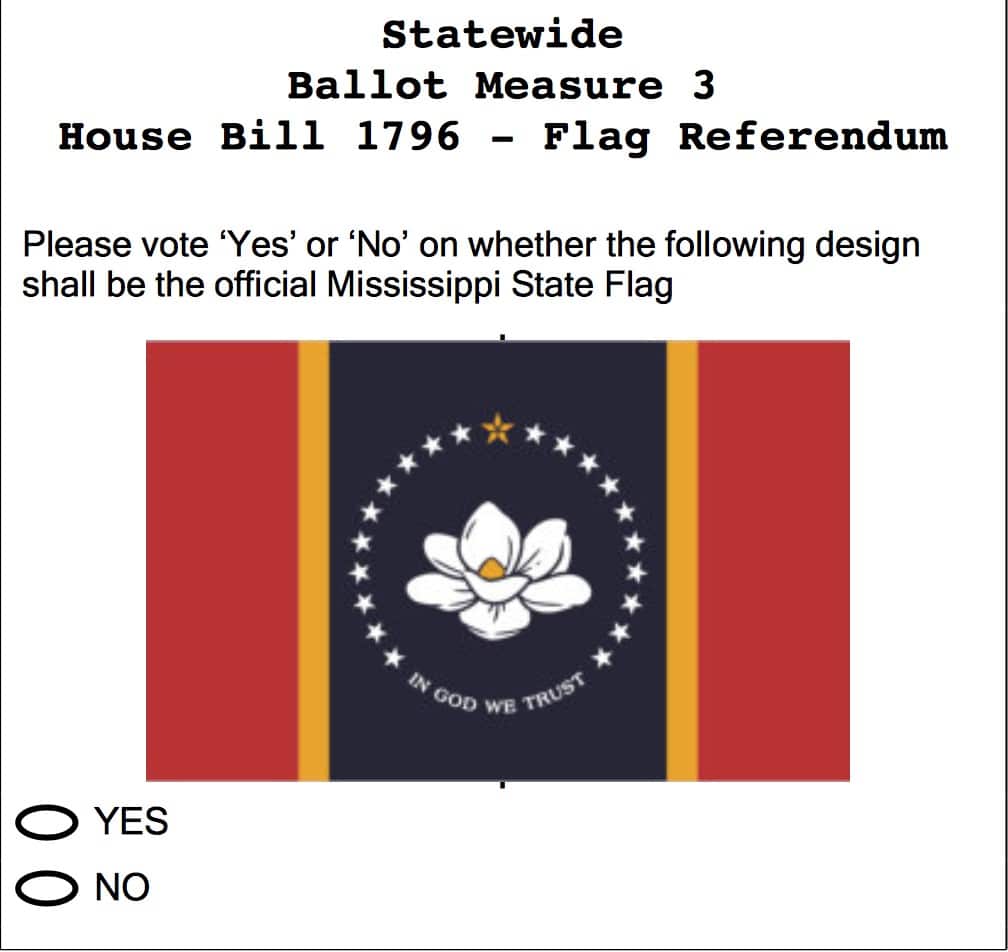 Following the removal and retirement of the former state flag and the submission of over 3,000 suggestions, the Mississippi Flag Commission selected what used to be called the “New Magnolia Flag” as the proposed design for a state banner.

The following description of the flag was authored by the Department of Archives and History following the section of the design.

The flag requires a simple majority to be adopted as the new state flag for Mississippi.

For a look at the full sample ballot, click here.

Update: Ole Miss freshman TE has “movement in all extremities”