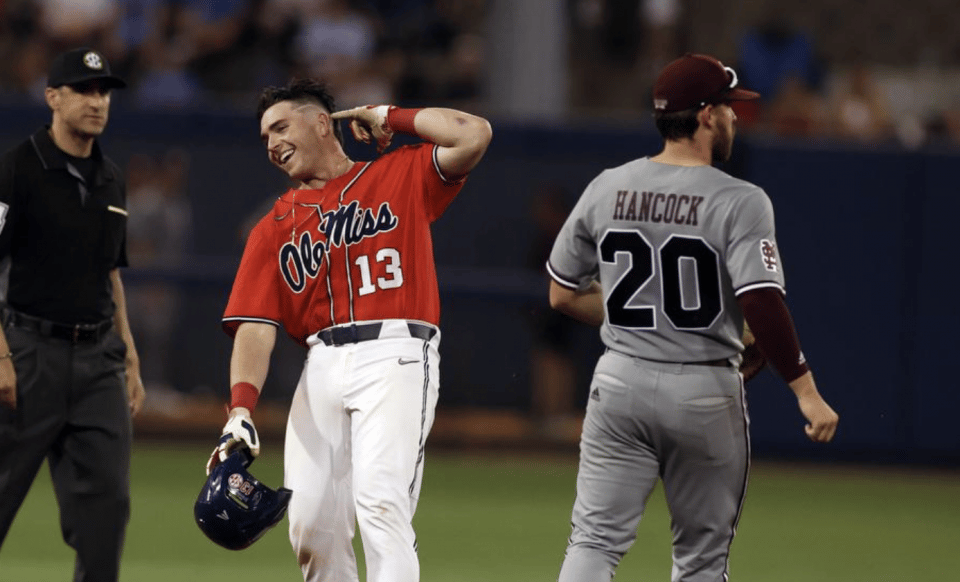 It might be football season, but it’s never too early to talk some baseball.

Earlier this week, Ole Miss and Mississippi State released their 2023 schedules with the defending national champion Rebels having their work cut out for them early on.

Following a non-conference schedule that features nine games against Big 10 opponents as well as a rematch of the 2022 Super Regional versus Southern Miss, Ole Miss goes through the gauntlet to begin Southeastern Conference play.

The first six weeks of conference play for Ole Miss begin in Nashville at Vanderbilt and end in Baton Rouge at LSU, deemed by many as the best team in college baseball going into the season. In between the Commodores and the Tigers are matchups against Texas A&M, Arkansas, and Mississippi State.

According to Kendall Rogers of D1Baseball, the Rebels’ start to SEC play is slated to be one of the toughest the program has seen in a while.

“As of right now, five of those first six weeks would involve opponents that are top 10 teams in the preseason,” Rogers said on SportsTalk Mississippi. “And that’s not including Mississippi State who by the way, I don’t know about top 10, but I think they’re going to be a lot better than they were last year.”

Speaking of the Bulldogs, Mississippi State has more of a backloaded schedule waiting for them – something that Rogers believes will work out well for a squad trying to claw their way back to the postseason after a surprisingly poor 2022 campaign.

“If you’re Mississippi State and you started the year with Ole Miss’ schedule in conference, I think if you’re (head coach) Chris Lemonis, you’re like, ‘Man, I wish I could switch spots with them,’” Rogers said. “You’re kind of liking the slower build-up to the conference schedule.”

Non-conference for the Bulldogs includes a series against Arizona State plus games against Ohio State, Oklahoma, California, Southern Miss, and Louisiana. Conference play begins in Lexington at Kentucky with a nice break of South Carolina and Alabama between Vanderbilt and Ole Miss.

After the home series against the Rebels, that’s where it gets tough for Mississippi State. The Bulldogs will travel to Knoxville to take on Tennessee before coming back to host Arkansas. The 2021 national champions will then play LSU in Baton Rouge before wrapping up the season at home against Texas A&M.

“They better hope they have a really good record going down that backstretch,” Rogers said.

The full 2023 schedules for Ole Miss and Mississippi State can be viewed here.